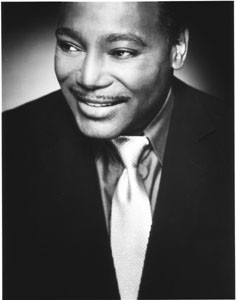 Jazz on the River

Breezin’ Through Town: George Benson performs on Saturday at Jazz on the River.

Birds of a Feather

Russell Malone and Benny Green swing into Jazz on the River

I started playing guitar in church at age four,” says Russell Malone of the toy plastic guitar his mother purchased for him as a child. “Even then I was aware of the different types of reactions that you can get out of people. When people hear music, you see them cry, you see them clap their hands. That’s some pretty heavy stuff, and even at that age I was aware of the different emotions that you can trigger with your music.

Malone has made a name for himself with lush, melodic guitar lines and has been hailed as a Wes Montgomery for the new millennium–though that comparison probably would make this modest jazz guitarist wince. Still, the comparison is not without some merit. Malone has four solo albums under his belt and a résumé that includes stints with Ray Brown, Harry Connick Jr., and Diana Krall. Of late, he is best known as one-half of a dynamic jazz duo rounded out by pianist Benny Green, a Berkeley-raised prodigy who as a teen played in veteran saxophonist Joe Henderson’s band.

The duo swings into Jazz on the River this weekend for a pair of dates on the intimate Wine Garden Stage on Johnson’s Beach in Guerneville.

“The first time I saw Benny Green in the flesh was in 1989. He was playing with Art Blakey,” Malone says. “I’d known about Benny and admired him as a musician. He sounded beautiful. So I kept my eyes and ears on him.”

The two musicians continued to cross paths on the road. Malone contacted Green to perform on his 1991 debut as a bandleader. Green wasn’t available, but Malone didn’t lose faith.

“I just knew that at some point we’d play together,” he says.

That opportunity arose in 1995. During a tour of Canada, Malone was doing a stint as the guitarist in Krall’s band; the Benny Green Trio was the opening act.

“Bennie and I would get together in his hotel room and hang out and talk,” Malone says. “I’d bring my guitar over and he had this little electric keyboard. We’d just sit and play. I told him, ‘Man, this feels pretty darned good. We should probably investigate this a little further.’ He agreed.”

What is it that Malone likes about Green?

As time passed, Green and Malone recorded three sessions together with Green as bandleader: 1997’s Kaleidoscope, 1999’s These Are Soulful Days, and 2000’s terrific Naturally. Yet, remarkably, they never managed to fulfill their wish to perform in concert as a duo.

That all changed in 2001 when Green and Malone made their first appearance together at the massive North Sea Jazz Festival in Holland. “We had started talking about those times when we’d gotten together in his hotel room, and decided we should reinvestigate this thing. We called our managers, and everyone got their ducks in a row,” Malone recalls. “We got together for about 15 minutes backstage before the festival gig and talked about tunes and just went out there and played.”

The results were stunning, and festival-goers witnessed the birth of a great new jazz duo. On this year’s widely acclaimed Jazz at the Bistro, recorded over two nights at a St. Louis nightclub and on which the musicians share equal billing, the duo really comes into its own.

“When you have that trust,” he says, “anything can take place.”