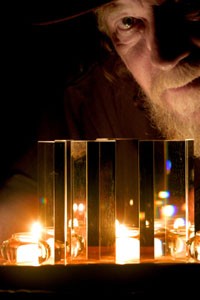 Prism Play: The prisms used in Jim Standard’s imaginative sculptures were once meant for U.S. tanks.

“I’ve been amazed by glass forever.”

Jim Standard, hunkered down on the floor of his compact Sebastopol cottage with his back propped up against a piece furniture, is gazing across the room into the multisided reflection of a Spectral Generator.

That’s right, a Spectral Generator. That’s one name, anyway–“And kind of a fun name, isn’t it?” he says–for the captivating sculptural glass and wood creations that Standard has invited me over, at midnight, to experience. More on Spectral Generators in a moment. Right now, Standard is rhapsodizing on his favorite subject: glass.

As he speaks, he holds a tone of voice that most people employ to describe a new lover or to confess a recent religious conversion. There is nothing new or recent about Standard’s love affair with glass, however. A master craftsman with over 30 years experience creating intricate glassworks of uncommon beauty, Standard’s affection for glass is the real deal.

“Glass is beautiful,” he explains, “capable of reflecting images, refracting light, magnifying and distorting and casting light beams. It’s easy to see why glass is used in churches and other holy places.”

Until recently, Standard had been devoting his energies and talents to large-scale projects, specializing in intricate beveled-glass mosaics using his own boundary-hopping artistic innovations, coupled with the leaded-glass techniques he learned during an intense four-year apprenticeship in the early ’70s, under master glassworker Joel Zimmer.

Standard’s most spectacular creations, which can easily run into the tens and hundreds of thousands of dollars, can be found in the form of spectacular Escher-inspired glass entryways and windows in Napa Valley wineries and libraries; as vast multifaceted prism windows in countless homes and businesses throughout Northern California; and as elaborate skylights–designed to portray Jungian-Pythagoran mandalas–in a spiritual retreat center in New Mexico.

Standard takes special pride in all of his installations, describing each in enthusiastic detail. Of them all, the one he feels particularly close to is the aforementioned skylight mandala, commissioned in 1992 by the late philanthropist Patricia Hewett, who envisioned the skylights as the signature piece of the vast spiritual retreat complex the Mandala Center, built on 20,000 acres in the high desert of New Mexico.

“[Hewett] challenged me to design a second window that would stand as a ‘a blazing hope and vision for the future of humanity’–those were her words,” says Standard. The result was a pair of circular, beveled glass windows, 5 feet across, each constructed with over a hundred separate pieces of hand-cut glass with 24-carat gold lining. The most complex of the two, named The Nine Stages of Man, is based on a threefold spiral, and contains a double-headed sunflower in the center with nine sunflowers emanating out from that.

While designing and crafting the extraordinarily detailed pieces, Standard immersed himself in studies of Jung and Pythagoras, Christianity, Buddhism, and Islamic pattern theory. “That project was a collision of art and physics and math,” he says. “When people visit the center and see the glass mandala at the top of that tower, [they] tend to ask for a pillow so they can lie down and stare up at the windows and go inside them.” As his eyes sweep across the Spectral Generators, he adds, “Sort of like what people do with these, only on a different scale.”

So then, what exactly are Spectral Generators?

Part candleholder, part sculpture, and part . . . well, part whatever you want them to be, Standard’s creations sound like some sort of weird-ass contraption from the movie Ghostbusters–something really big!–but are actually rather small, intimate-scale art pieces resembling a science-fair project as imagined by the dream team of Escher, Dali, and Leonardo da Vinci. On beautiful, polished-wood trays made of red oak, with edges made from either white oak, walnut, maple, Spanish cedar, or hickory, Standard arranges a number of 8-inch-long glass prisms, a surplus batch originally manufactured as optical lenses for the periscopes in U.S. military tanks.

The prisms are embedded in resin. When a votive candle is placed between the prisms and lit, the result is a candle flame reflected eight or more times, generating a remarkable amount of light as it bounces back and forth among the reflective glass, casting spectral shadows and rainbow images onto the wall, the ceiling, all around the room. At the moment, in Standard’s darkened room, there are 10 of the things going–each lit with a candle apiece–generating as much light as a hundred candles.

“If you get down lower, you get the prism effect,” Standard says, dropping down to gaze more closely into one of the pieces. “There’s just one candle in that one, but you get a bunch of little ghost candles in the background when you move a little, and the ghosts, if you pay attention, change colors, from red to green to blue to yellow–the whole spectrum. I’m getting some really hot stuff going on in that one over there.”

The jump from large-scale permanent installations to such small portable pieces is a natural combination of practicality and personal growth. After years working in relative solitude, Standard is relishing the one-on-one contact with people as he hand-sells the Spectral Generators (each going for between $125 and $160, depending on the number of prisms it contains). Then again, in today’s economy, he hasn’t been seeing as much large-scale work as he did 10 years ago, so the smaller pieces make good economic sense.

Not that Standard planned any of this.

It was over a year ago that he acquired the prisms after getting a tip from a friend that a large shipment of decommissioned prisms was available. “They were intended for use as periscope lenses,” Standard says, “made for the U.S. government, designed to go around the inside of the turrets in tanks. These were surplus, left over when the government changed tank specifications.”

For several months, Standard didn’t know quite what to do with them. He worked some of them into occasional window commissions and used several of them in a series of kitchen cabinets he was hired to design windows for, working the prisms in around the grape and grape-leaf elements in the cabinet doors.

“The prisms make a beautiful abstract element,” he says, “that catches light and throws prism light around the kitchen, multiplies the light, catches your eye and sparkles. They’re a lot like diamonds.”

One evening a few months ago, says Standard, “I was playing around, and I stood a bunch of them up like little funhouse mirrors. There was this candle there, so I stood some of them up around the candle, and I started seeing there were all these candle images–like 10 or 12 images per candle!” For the next few days, he experimented with different methods for mounting the prisms, finally settling on a base of casting resin, which gives the effect of a tray of water from which the prisms rise, and suggested an alternate name for the pieces: Rainbows on the Water.

Since starting to build the pieces, of which he has enough prisms to make about 150, Standard has not been able to keep them in the house. “The minute somebody sees one,” he says in genuine wonder, “they want one. People have been taking them home to use on their altars, as centerpieces on their table, as gifts for their girlfriends.

“It’s difficult to define or describe how they move you,” he says, “but it’s impossible to deny that they do move you. Each one touches something in us. Maybe it’s taking something that was used in a mode of destruction–battle vehicles, things that dominate and crush and destroy–and from that domination we now have something meant for rejuvenation and contemplation and meditation and healing. I don’t know.

“What I do know is that whenever somebody sees one,” Standard smiles, his face aglow in the light of all those candles, “The first thing they say is, ‘Wow! How beautiful is that!'”

To contact Jim Standard for an appointment, call 707.547.9317. To learn more about his work, visit www.sonic.net/~prizmag/index.html or www.prizmagic.com.

‘Master and Commander: The Far Side of the World’