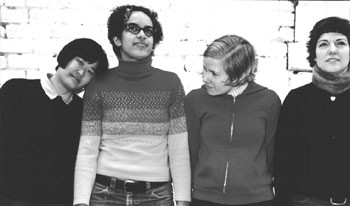 The All Girl Summer Fun Band

For A Good Time, Call: The All Girl Summer Fun Band beats the Portland dreariness with upbeat pop.

All Girl Summer Fun Band lays it on the line

Remember those old ads for Club Med vacations? “The antidote to civilization” was the slogan. I was surprised to think of it while listening to 2, the second release from Portland-based All Girl Summer Fun Band. The quartet of best friends pack 14 songs into 29 minutes, and fill each second with girl-group harmonies, boy-obsessed lyrics, and some fierce guitar licks filling out the sound. It makes for a great day-trip away from the daily grind, but who knew one of the rainiest places on earth could export such joyful noise?

Comprised of Kim Baxter, Arirak Douangpanya, Kathy Foster, and Santa Rosa native Jen Sbragia, the band was formed by Baxter, who wanted to get a group of girls together to play music with for a summer. All have played or still play with other bands, but this project was strictly for fun. Their name was more or less their mission statement, which turned out to be such an accurate summary of their sound that they kept it. Their first release came out in early 2002 and put fans everywhere on a sugar high.

The new record crams a heap of sha-na-na-na‘s and uh-huh, uh-huh‘s into its inventory of crushes and obsessions (including an ode to skateboarder-turned-actor Jason Lee, memorialized in a sighing chorus as “Doin’ kickflips in my dreams”). The music is exuberant and fun, causing critics to invoke their favorite childhood toys and candy, and sometimes to invoke the dreaded t-word, to Sbragia’s chagrin. “We were getting pegged as a twee, kind of silly novelty, and that’s annoying. I’m not a teenager, [I’m a] 33-year-old female musician,” she says.

Time has enriched the band’s lean approach as well. “We’ve all been playing together a certain amount of time, and our songwriting alone and together has become tighter and more assured,” Sbragia says. “Our first record [the self-titled All Girl Summer Fun Band] was the result of playing together for fun and ending up with enough songs for a full-length record. I think we just kept playing together and started to take it a little more seriously with the second record.”

They’re not out to scare away their fan base, though, Sbragia points out. “Not too serious! We’re still basically about fun.” It just comes with a side of respect for their chops now.

To counter the critical emphasis on cuteness, all four girls used distortion pedals to roughen up their sound a bit, which gives the swoony lyrics a little hormonal boost. “Grizzly Bear” features some cool, echoey surf sounds from Sbragia’s guitar. “Tour Heartthrob” has a churning rock base and features more aggressive vocals from the band (though it must be pointed out, the lyrics actually do rhyme “France” and “underpants,” which is pretty damn cute).

“Down South, 10 Hours, I-5” is a quick rock-and-roll road trip in song, leaky van and all. “Video Game Heart” accents a steady, darker beat with quirky old-school keyboards that accent the title. And “Daydreaming” is a quieter tune, recalling Sbragia’s other project, the Softies, currently on hiatus while band mate Rose Melberg enjoys new motherhood.

Did Santa Rosa’s punk heyday influence Sbragia’s playing? Not so much, she says. “I was [into] heavy metal [as a] teenager, not punk.” Taking in shows at the River Theatre, the Phoenix Theatre, and the Cotati Cabaret ultimately led her to start playing music on her own. “A couple of years before I moved to Portland, I was playing music with my friend Sari Bacilla in Pretty Face. We hung out a lot at Cafe This,” the Railroad Square coffeehouse that hosted a heap of shows in the early 1990s. She took a “punk-rock road trip” in 1994, ultimately settling into Portland, for the weather, of all things.

“It never rained enough for me in Santa Rosa, and I really liked the idea of living somewhere cold and damp,” she says. Lots of Sonoma County creative types have made the move north in recent years, but Sbragia indicates it may not be the bargain they’re expecting. “Portland has kind of been ‘the place to move to’ for a while now, and I think rent and housing prices are [rising],” she says.

While the area’s benefits include a good public transit system, there’s that rain to contend with. “You have to be able to handle the winters and not seeing the sun for a while. It can be dreary,” she says. “But I like that. You just have to brew your coffee a little stronger.” Having All Girl Summer Fun Band blood in your veins probably helps, too.