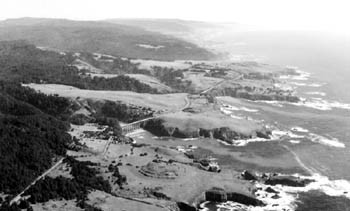 Liquid Gold: The mouth of the Albion River, shown here, was a potential source of big bags of water for Southern California.

Our heroes in this story are environmental and community groups willing to stand up for the river and its wildlife. They organize protests and sway public opinion so that hand-in-hand they confront the villain, who withdraws behind the curtain, hissing that he’ll be back.

Of course, real life is never that clear-cut. Underneath the water-bag proposal by Aqueous, formally Alaska Water Exports, is another story about who owns our water and how vulnerable it is to outside influences.

Ric Davidge, who served under Reagan’s sub-cabinet in the Department of the Interior, is president of Aqueous, which also has international ties to Luxembourg-based World Water, SA. His 18-month attempt to get approval to take excess water from the Gualala and Albion rivers ended this month when he withdrew the proposal after mounting opposition and a unanimous vote by the California Coastal Commission to protest the project.

“This is a victory for us, and we are safe for the moment,” says Linda Perkins of the Sierra Club and the Albion River Watershed Protection Association. “But only for the moment. We’re going to continue with our efforts to protect the rivers.”

Davidge, however, feels that his project was misconstrued. He picked the two rivers based on many factors, including their long, controversial histories, which he assumed would mean an accumulation of data on their environmental conditions. But he was “shocked” by how little information there was and by how many environmental studies the state would require him to perform. The studies, costing over $1 million per river, made the plan no longer economically viable.

Davidge adds that Aqueous was left out of much public discourse about the project.

“There’s an assumption of fair play so that both parties would have direct notice of all public discussion on the issue, but we were never notified about several meetings,” Davidge says.

Jim Jordan, a member of Friends of the Gualala River, says he has no sympathy for Davidge, who was invited by his group to explain the project.

“He came and, frankly, his presentation failed to present any science supporting how his project would have been environmentally sound,” Jordan says.

The environmental impact of the plan would likely have been severe, varying from tearing up the bottom of the river for a piping system, to robbing endangered species like salmon of the water flow they need to spawn.

Davidge claims that his project would have had little environmental impact when put in the context of other water-shortage solutions. San Diego’s other choices to fix its water problems include building a dam or river diversions or shutting down agriculture. Compared to these solutions, he says, the water bag is very environmentally friendly.

But the best solution to San Diego’s problem is conservation, say environmentalists.

Davidge’s plans raise the question of who owns water and whether it is a resource or a human right. The problem is that California’s water laws date back to the Gold Rush, when the first miners who came upon water got use rights. This first-come, first-serve basis is why Davidge’s plan gained so much momentum in the first place–the law traditionally would have allowed him to claim the water.

Davidge’s plan may be the first of many as more foreign interests eye Northern California’s water as a potential supplier for the state’s water needs. With this as a threat, both sides agree that California needs to begin a public conversation about water ownership.

As for Davidge, he is reportedly in discussion with other sources, possibly including a now-defunct paper mill in Humboldt County.

“Along the northern coast, there are large commercial users going out of business, such as fisheries and pulp mills, that have water supplies available to a commercial buyer,” he says. “We are in off-and-on discussions with them.”

In other words, he’ll be back.