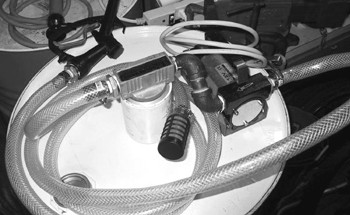 Homegrown Alternatives: Setting up to convert vegetable oil into biodiesel just takes a trip to the hardware store.

The oil embargoes of the 1970s–with their inflated gas prices and endless lines at the pump–are a time nobody wants to revisit. But now, with SUVs crowding the highways, Venezuela temporarily cut off as a source of crude oil, and the Bush administration galvanizing a very bleak situation with Iraq, it looks like we may be reliving some unsavory bits of “me decade” nostalgia very soon. A fledgling co-op in Sonoma County isn’t sweating it, though. The fuel for their cars is 100 percent domestic, 100 percent organic, and nearly 100 percent vegetable oil.

It’s called the Cold Pressed Fuel Cooperative, and its members are part of an alternative fuel movement that’s gaining momentum across the globe. Founding member Gary Liess proudly bears a sign on his sporty red Mercedes that says, ‘Run by Vegetable Oil.’ “We’re probably one of the first co-ops in the country to get together and formalize a model,” Liess says.

Liess, a financial planner who lives in Santa Rosa, insists he’s “not a car guy”; to him, the car he drives is just a way to get from one place to another. The fact is, any vehicle with a diesel engine can run on biodiesel with no adjustments, and many vehicles can, with some simple alterations, run on straight vegetable oil (SVO).

“This is not new news,” says Liess. “This is 100-year-old technology, and we’re just now coming back to it. Rudolf Diesel designed this engine to run on vegetable oil. He did a demonstration at the 1900 World’s Fair where he ran his engine on peanut oil. The engine is not a bad engine; it’s the fuel that’s put into the engine.”

The six-month-old co-op presently obtains its oil from Spectrum Naturals in Petaluma, a company that makes organic oils. Whenever Spectrum switches from bottling one oil, such as olive, to another–say, flaxseed–they have to clean out the lines in the tanks; Spectrum produces about 1,500 gallons a month of waste oil.

Normally, they’d have to pay a company to come and dispose of it. When a nonprofit co-op picks up the oil and uses it for fuel, Spectrum benefits doubly by getting tax write-offs. Any type of vegetable oil can be used to fuel a car, though some are better than others.

“If you look at it from an economic standpoint, we’re running on free fuel,” says Liess. “And we’re not polluting nearly as much as everything else out there. It’s pretty much win-win.”

Cars can use vegetable oil as their primary fuel, but the vegetable oil itself is too thick to ignite the engine. For ignition purposes, either standard diesel or biodiesel oil can be used. Biodiesel itself is nothing more than vegetable oil that’s been chemically altered with lye and either ethanol or methanol.

Yokayo Biofuels, a company in Ukiah, will deliver biodiesel to your house, but it can be made at home through an amazingly low-tech process. (It’s also much cheaper that way. Biodiesel runs about $2 a gallon but costs 60 cents a gallon to make. Another new co-op, affiliated with the Cold Pressed Fuel Cooperatives and as of yet unnamed, gets together to make their own biodiesel.)

Meanwhile, converting a diesel engine to run on vegetable oil isn’t as daunting as it sounds. Conversion kits run anywhere from $200 to $800. Add installation on top of that, and it’s possible to own an SVO-run vehicle for a few thousand dollars.

Liess stresses that alternative fuels are only temporary solutions, but he notes that their emissions are more environmentally friendly than petroleum-based fuels in any case. “There’s really no negative with this as of yet.

“I haven’t gone to a gas station in nine months,” Liess says with a gleam of joy in his eye. “This is something that anybody can do. You can do it right now, it’s simple.”

For more information about the Cold Pressed Fuels Cooperative, go to www.veggieavenger.com.