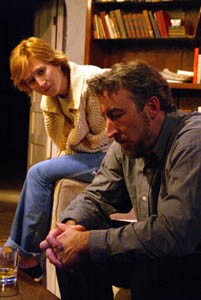 Playing Games: Danielle Cain and Dodds Delzell scramble to regain or relose their relationship in ‘Skylight.’

An old love gets a second shot in ‘Skylight’

The lovers’ quarrel is a many splendored thing. It provokes outraged humanity to its profoundest poetry, illuminates every dark corner of our secretive souls, infuses our normally sluggish blood with a pulsating mix of wild wit and feral wickedness, sly malice and keen-eyed compassion.

That’s how it works onstage, anyway. In the real world, alas, most of us struggle on such occasions just to stick two syllables together. But if going to the theater was like looking in a mirror, how many of us would pay for seats?

Certainly, real life does not hold a candle to the titanic clash of personalities at the heart of Skylight, now onstage at Actors Theatre in a production directed by Kent Nicholson.

Set in Thatcher’s England, this offering from acclaimed British playwright David Hare pits two unlikely lovers against each other in a punishing but poetic encounter that takes place in a single room over a single night.

The room in question is the chilly, rundown flat belonging to Kyra (Danielle Cain), an idealistic school teacher laboring to improve minds and save souls in London’s impoverished East End. In a former life, Kyra was a waitress, and on this chilly evening, she receives an unexpected visit from her former boss and former lover, Tom (Dodds Delzell), a swaggering restaurateur with a burgeoning business empire, a recently deceased wife, and a badly broken heart.

She’s surprised to see him, and he’s almost as surprised to be there. But before long, they’re going at it hammer and tongs, trying love on for size again and arguing over everything from old romantic secrets to the social implications of her far-from-lucrative career choice. “You never accepted the nature of business,” he chides. “That’s why you had to leave.”

“Oh,” she muses in reply, “I thought I had to leave because your wife found out that I’d been sleeping with you for six years.”

Tom wants to ease his guilt over the affair and the way he subsequently dealt with his wife’s illness: he built her a beautiful bedroom, saw her settled comfortably into her deathbed, then ran off to open more hotels and restaurants. “It’s not like it was a test,” he grumbles. But he knows it was, and he knows he failed. Kyra has plenty of guilt of her own, but she’s also out to prove to Tom that her new life has as much merit as his career.

This might sound like a grudge match between two stereotypes, and that assessment isn’t totally off the mark. But Hare (currently at work on a film adaptation of Jonathan Franzen’s The Corrections) equips his characters with enough irony and ambiguity to keep them interesting, and Cain and Delzell find those crucial complexities and work them with ingenuity. In the process, they bring this passion play to sweaty, intimate life.

It should be noted that doubt and pain are only half the story here. Skylight is also a very funny play, full of the kind of banter that only exists between two people who know each other all too well.

But the play’s greatest strength is that it carefully maintains the central suspense: Is Tom and Kyra’s encounter a blast from the past or the wave of the future? The end, which comes after an emotional roller-coaster ride, is far from predictable–but it’s also more than satisfying.