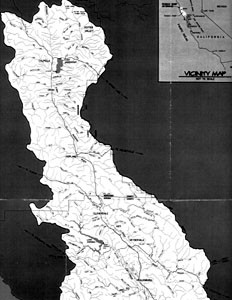 Turtle Creek winds through Marty Griffin’s property in Healdsburg on its way to the Russian River. This creek, like many others in the Russian River Watershed, has suffered serious abuse. Gravel miners nearly destroyed it when they dug a huge pit at its mouth in the early 1960s. For 38 years, Griffin, whose property includes Hop Kiln Winery and who cofounded Friends of the Russian River, has been repairing the damage. Now, just as Turtle Creek is beginning to heal, there’s a new threat: A group of farmers, the city of Santa Rosa, and the Sonoma County Water Agency intend to use city wastewater for irrigation.

Three of the 17 reservoirs described in the plan would be in the headwaters of Turtle Creek. Reservoirs leak, says Griffin, and that’s a problem. “This wastewater is lethal to aquatic life. [Wastewater leakage from the reservoirs] would kill the little animals and plants that live in streams and creeks and the Russian River.” The plan also calls for five reservoirs next to the Bishop’s Ranch retreat center, just above water agency wells. “There must be better locations for wastewater storage than right in the watershed that feeds your drinking-water wells,” says Judith Olney of the Healdsburg Association for Responsible Citizenship.

Some of the proposed reservoirs are 120 feet high, and that presents other problems. “They want to put them in steep canyons with very unstable soil,” says Griffin. “They’re going to have to take out hundreds of thousands of cubic yards of soil. It will make a God-awful mess. If [the reservoirs] break–which is very likely, because this is a very active earthquake area–they would inundate parts of our ranches with a wall of water that would wipe out everything on the way down.” Bishop’s Ranch is also alarmed and is a plaintiff on three of the 19 lawsuits filed against the project.

Celebrate the Watershed: We are all part of the watershed.

Dan Carlson, capitol projects manager for the Santa Rosa Utilities Department, acknowledges that reservoirs leak, that Santa Rosa’s treated wastewater kills marine life, and that Healdsburg is prone to earthquakes. He says that environmental impact reports will evaluate all this, as well as mitigations that include lining reservoirs to prevent leakage, determining if the amount of leakage would significantly impact downstream users, and evaluating the effects of an earthquake. Pam Jeane, deputy chief engineer at the Sonoma County Water Agency, says, “Whoever proposes a project will have to do an environmental review. People will have a chance to comment at that time.” No specific project has been selected yet, she says.

But Griffin has no doubt that the plan to construct 17 wastewater reservoirs and 74 miles of distribution lines in North County is a done deal. It costs $875,000 to develop the plan and over $20 million to make the geysers’ pipeline large enough to accommodate wastewater for irrigation. Santa Rosa is also prepared to pay up to 100 percent of the cost of constructing reservoirs on private agricultural land. Acknowledging that all this amounts to a sizable investment in a project that hasn’t even gone through an environmental impact report yet, Carlson says, “I believe that [the Santa Rosa City Council and Board of Supervisors] believe that some part of that project will likely go ahead in the future, if not all of it.”

A major appeal of the project is that it will allow Santa Rosa to build affordable housing in the city center. Carlson says that though front yards and backyards are good places to dispose of wastewater, the new dwellings won’t have any yards. The wastewater has to go somewhere. Carlson says, “Why not use it for agriculture? Farmers already need it, and we want to make sure that if those areas want to use the water, we have it available to them.”

Tom Hobart at Clos du Bois Winery in Healdsburg supports the project because vineyards will be “at the bottom of the list” for fresh water as it becomes increasingly scarce. “Twenty or 25 years from now, this may be the most important thing we ever did,” he says. But as owner of a winery himself, Marty Griffin questions the wisdom of using wastewater to irrigate vineyards. “It may hurt the reputation of vineyards in North County,” he says. “It’s very hard to clean up, and there are a lot of chemicals left in the wastewater even after treatment.”

What’s really driving this project, says Griffin, is greed. “Sonoma County is a developer-controlled county, and Santa Rosa is a developer-controlled city. They’ll do anything to get rid of the wastewater, because it’s the only thing that’s holding up development. Sonoma County could end up like Los Angeles. I think they should slow down their growth, stop their growth. They should recycle all this wastewater in their own backyards and not ours. It’s a big rip-off for North County.”

Devoted as ever to Turtle Creek and the Russian River Watershed, Griffin says, “They’re going to build those reservoirs over our dead bodies.” On second thought, he adds, “I’ve never believed in lying down in front of bulldozers, because by then it’s too late. We have to stop them in the courts and in the court of public opinion.”