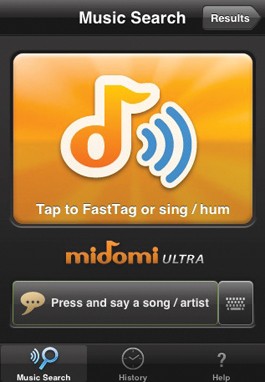 I‘d heard about this thing. This thing that lets you hold a phone up to a speaker and, pulling some ultra-insane and complicated algorithm out of the universe, analyzes the music’s wave forms and compares it instantaneously against a universal database of every recorded note in history and then—poof!—just like a TV dinner popping out of the microwave, tells you the title and artist of whatever crazy song happens to be playing at the time.

And I thought, oh well, there goes the fun. There goes the mystery. There goes the fantastically aggravating experience of hearing the world’s most kickass song and screaming, “Holy shit, my life will never be the same,” and having the song stick in your head for days while you parade around like a fool asking everyone you know if they have the faintest idea who could possibly sing this totally awesome song, calling record stores and singing it over the phone, grasping for any information about The Song.

I had even heard about this creepy super-thing that computes all the sound files of a recording and, establishing key, pitch, tempo, modulation and sonic appeal, tells record executives which track is most likely to be a hit song—most famously used to successfully select the first single from Norah Jones’ debut. Because of the programmed homogeny in reflecting certain variables of other established hit songs, and because well-paid record executives need no longer actually listen to or experience the culture they claim to create, I’d swiftly established that thing as the Devil.

But what I had not heard about was the other thing. The thing that instead of analyzing the actual original recorded song’s wave forms analyzes your singing. You! You sing a song into your iPhone or computer, and if you’re at least decently on-key somewhere in the range between Ethel Merman and Maria Callas, it tells you what song you’re singing!

I don’t have an iPhone, but a friend who downloaded the app handed me his the other day. I immediately began singing a current Top 40 hit: “I’m in love wit’ you baby, and I wancha to know / That I’m hooked on yo’ body, and I’m tryin’ to be yours.” I tapped the phone. Three seconds later, there it was on the iPhone screen: “The-Dream—’Rockin’ That Shit.'”

I can’t tell you exactly what I felt when this happened, except that I’m glad my brain didn’t short-circuit and leak slowly out of my ears. Was this really happening? Was my childhood vision of artificial intelligence, of being able to talk to the television, of being able to relate on a semi-emotional level with computers—was it all coming true?

I tried Tony Bennett. I tried Weezer. I tried Neutral Milk Hotel and John Prine and Keyshia Cole. And it knew. The thing always knew.

Was it looking for just the melody or could we sing the guitar parts? I buuuunnhh-buuuunnnhhh-buuuhhnnn&–ed my best Gibson Les Paul crunch into the phone. Sure enough: “Deep Purple—’Smoke on the Water.'”

I began to feel small. I began to feel like the thing was smarter, better, bigger than me. I needed a way to fool the thing. I had an idea. I sang something it was sure to know. I sang a Christmas song.

Except I sang a pitch-perfect rendition of a Christmas song with the absolutely filthiest lyrics I could imagine. Take Lil’ Kim and Andrew Dice Clay and Luke Campbell and Penthouse Forum and Blowfly and ramp it up times 12, and add a dose of Christian Bale and Dick Cheney, and that’s what I sang into the phone. I tapped to see what it said.

Midomi can be downloaded at $2.99 for the iPhone or simply used for free at www.midomi.com.