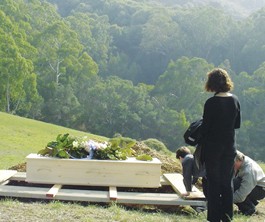 A hawk glides on the updraft sweeping in from San Pablo Bay, soaring over a verdant slope with sizable stones scattered amidst the lush native grasses of spring, a pastoral landscape that masks a curious mix of technology and tradition, new applications of old values. For invisibly dotting the placid hillside lie the remains of some 150 pioneers in the emerging movement known as “natural burial.”

Drawing on models from Great Britain, where the natural burial movement has been gaining ground for nearly 20 years, Beal and her clients have been slowly pushing one of the country’s most staid and convention-bound industries to reconsider its long-established practices. Her customers, Beal says, “want a choice; they want the natural option. And the cemeteries and funeral directors have had some difficulty changing their model, because it means getting new products and thinking about new ways to do things.”

Tyler Cassidy was the first to do so in California. In 2004, he bought the 133-year old Daphne Fernwood Cemetery, 32 acres of steep-shouldered hills and open meadows that were already the final resting place for generations of some of the North Bay’s founding families, where he introduced a new, natural approach. Although the cemetery maintains a modest “traditional” section, the majority of the property, called Forever Fernwood, is intended for natural interments, says cemetery manager Kathy Curry. Some plots are identified with natural rocks ranging in size from backpack to major luggage, often with names and dates carved into them. Small trees denote a few gravesites, and one lies beneath a small driftwood assemblage. But many are simply left unmarked.

Inside the cemetery offices, the land is mapped out in 12-foot hexagons, each able to accommodate two bodies. The sites already in use are shown, of course, but they are also clearly identified out on the hillsides through an unlikely application of GPS technology.

“We bury a radio frequency ID tag with them that’s programmed with their name and their dates, so that we can always find them again,” Curry explains. “We know where everybody is, but as you look at the surface of the land, you might not recognize it.” A long-handled yellow sensor, something like a truncated metal detector or weed-whacker, reads the signal from the purple, grapefruit-sized marker, which is placed 18 inches below the surface (the bodies themselves are, on average, another four feet down).

But technology is not what draws people to Fernwood, Curry says. Mostly it’s environmentalism, a desire to use fewer chemicals and other resources, to generate less pollution. And that makes natural burial an appealing alternative to cremation, which remains the dominant practice in this area.

“Cremation uses a significant amount of natural gas,” Curry elaborates. “So from an environmental standpoint, that’s the biggest downside. You’re also putting some pollutants back into the atmosphere. Although we have state-of-the-art equipment that does as much filtering as possible, there’s still some mercury from people who have the old amalgam fillings that goes back into the atmosphere.”

For hospice patients, adds Cynthia Beal, there is “an opportunity to think about their deaths in advance. You can plan it so you’re not at the mercy of whatever options are shown to you in a very short time.”

Even so, green burials are still rather rare. “I can’t recall that anyone has ever asked for one,” reflects Laura Nesius, general manager of Santa Rosa Memorial Park. “If somebody were to ask us, we’d have no problem doing it,” she adds, probably at its new 40-acre Shiloh Annex, south of Windsor. It has “more of a woodsy setting,” Nesius says.

“If you put flowers on a grave here, they may be there a week later or they may be eaten by the next morning,” she laughs, “depending on whether the deer come through that night.”