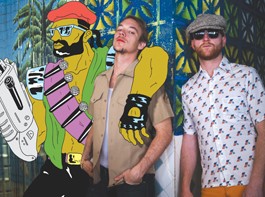 Time was when teenagers only had the allowance to buy one album, and for the rest of the week, that album would define you in your circle of friends and classmates. You either bought the Smiths’ Meat Is Murder or Sade’s Diamond Life. You either bought Public Enemy’s Fear of a Black Planet or Bell Biv Devoe’s Poison. You either bought Franz Ferdinand’s self-titled debut or Modest Mouse’s Good News for People Who Like Bad News. You’d bring them home, tape them for each other, and that’s what you’d talk about for the next seven days.

The purchasing model may have changed, but the idea of defining oneself by music has not. Teenagers this week have a pretty clear choice to make. The band Brokencyde was a pretty funny joke last year with a video, “Freaxxx,” that regurgitated crunk and screamo in atrocious fashion. Everyone hated it, but everyone reposted it, and now Brokencyde has a record deal. I’m Not a Fan . . . But the Kids Seem to Like It is a play on what most adults think of their processed, mashed-up music, but don’t be alarmed—no kids actually like Brokencyde. The kids instead like to complain about them, which they do in very funny and profane ways, usually involving members of the band suffering painful death. As for longevity? Brokencyde’s Wikipedia page has been deleted eight times so far, citing “Doesn’t indicate importance or significance.”

What will stick around longer is Major Lazer, and their debut Guns Don’t Kill People . . . Lazers Do. Diplo and Switch (above) are the two producers behind M.I.A., and they team up for an album heavy on the triplet-riddim dancehall beat—the reggae and hip-hop mix fits as seamlessly as the album’s cover art reflects both hand-drawn Jamaican mix tapes and Miami booty-bass CDs. Guest spots from Santigold, Amanda Blank and a horde of Jamaican artists relatively unknown in the States bring us straight to Trenchtown via the Williamsburg L Train. Switch and Diplo know full well that cars need something to bump when the heat’s in summertime session, and even though the novelty “Mary Jane” sounds like something Brokencyde might attempt when they get older and smoke more weed, Major Lazer is the easy winner this week. They play Friday, June 26, at the Grand Ballroom. 1290 Sutter St., San Francisco. 9pm. $28-$70. 800.745.3000.