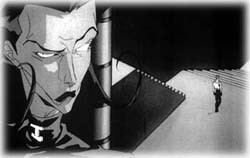 The Best of Liquid Television, Vols. 1 & 2
Blessed by stunning visual imagery, innovative story lines, and cutting-edge animation–produced by the multimedia wizards at the San Francisco­based Colossal Pictures–these two fast-paced collections highlight the dizzying ride that was MTV’s brilliant weekly animated series. The offbeat gems included–from “Aeon Flux,” the sexy and stylish sci-fi fantasy; and journalist and playwright Cintra Wilson’s “Winter Steel,” chronicling the lurid exploits of an orphaned Barbie doll-like character-turned-dominatrix biker chick from hell; to the toxic Boy’s Life adventures of “Billy and Bobby”; and the kitschy cool of “Art School Girls of Doom”–all reside in a hallucinatory dreamscape populated by homicidal maniacs, sexual deviates, mutants, and assorted non-PC misfits. But don’t be scared: Beneath this seething surface of acid-drenched mayhem lies some of television’s most sophisticated social satire, blasting everything from the brutality of American society to the vacuousness of the news media. This is trippy TV at its best. (Unrated; 45 min.)Greg Cahill

Small Faces
Director Gillies MacKinnon’s Small Faces is an artfully told, very well acted, but occasionally gloomy tale of three brothers in poverty-stricken Glasgow in 1968. Lex (Iain Robertson) is a young artist overshadowed by his oldest brother, Alan (Joe McFadden), who is on the fast track to art school. His other brother, Bobby (J. S. Duffy), has already been swept into gang fighting. MacKinnon (The Playboys) takes some of the sting out of the story with humor and nostalgia. Robertson makes an appealing lead, a boy distracted by his desire to grow up just like his older brothers, and not sure whether to take the path of the paintbrush or the switchblade. There is support for the arts here–often in odd places. One of the gangsters offers to buy a painting and tells Alan, “Y’been looking at a lot of Egon Schiele’s paintings, am I right?” Small Faces veers into high tragedy followed by an irresolute ending. And yet MacKinnon has crafted some marvelous moments, including a wild, frightening chase on stolen bicycles away from a pursuing gang called the Tongs, and a night-time raid on the local art museum. Be aware that the Weegie accent is in full flower here; even if you have an ear for it, you’re bound to miss at least a few lines of dialogue. (R; 108 min.)

Manny and Lo
Pregnant teenager Lo, short for Laurel (Aleksa Palladino), is in serious denial about the upcoming blessed event, and so she hits the road with her little sister Manny, short for Amanda (Scarlett Johansson). Breaking into a country house, the two stumble across a childbirth video and realize the trouble they’re about to be in for, and so they decide to kidnap a touched-in-the-head baby boutique cashier (Mary Kay Place). An inoffensive little movie, but wispy, and finished off with a ridiculously positive ending. (R; 90 min.)

Dallas Doll
Sandra Bernhard is such a real witch that casting her as a witch is a redundancy. Bernhard plays Dallas Adair, a noted golf pro who comes to an affluent Australian town to rid the country-club types of their inhibitions. The devilish androgyne is a home wrecker who proceeds to undo everyone in a repressed Australian family, even the family dog, before the balance is set right in the end. Dallas’ special target is Rosalind (Victoria Longley), a timid hausfrau who, in the film’s best scene, is challenged by Dallas to a game of strip miniature golf while Doris Day sings “Move Over, Darling” on the soundtrack. Director/writer Ann Turner takes a weirdly nationalistic turn, finding symbolic value in naming Bernhard’s character after the most squalid city in America and having a marching band play “Yankee Doodle” while developers despoil the countryside. It’s narrow-mindedness in the midst of a broad-minded movie. Dallas Doll is more than just flawed, but Turner’s sensibility is interesting; her next picture will be one to watch. (Unrated; 104 min.)