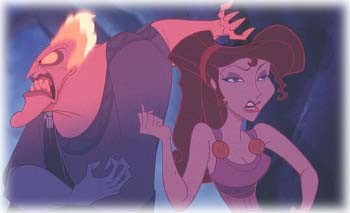 Disney, ‘Hercules,’ and the American chest

HERE’S THE DEAL: It’s OK to like the new Disney movies,” explains my oldest daughter, “Eleven” (not her real name; just her age). “But you have to keep it secret if you like something like, say, Bambi, because then you’ll be made fun of.”

“Bambi?” I pause at a red light and turn to face my offspring. Both girls, about to enter the fifth and sixth grades, have agreed to discuss the new animated Disney film, Hercules, on the one condition that I not use their actual names. Having just departed from an advance screening of the movie–a dazzling, laugh-filled reworking of the famous Greek myth–we are now off to find some lunch.

But first, there’s this Bambi thing to clear up.

“Is it really uncool to like Bambi?” I ask, incredulous.

“Uh huh,” affirms “Almost Ten” from the back seat. “I have a friend who wore a Bambi shirt to school once. She had to say that her mother forced her to wear it.” She pauses, then leans forward. In a hushed whisper, she confides her own dark secret.

“I like Barney,” she confesses of the purple dinosaur, her face blossoming into a radiant blush. “Two of my friends do, too, but we pretend to hate him. If you like Barney, all the popular people will think you’re unpopular.

“You have to lie a lot at school,” she adds with a sigh.

“We’ll get back to that,” I inform her. First I want to know what they thought of the movie.

“I loved it. Weird but true,” says Eleven. “Judging from the TV commercials, I’d been thinking, ‘Oh no. One of those typical Disney movies.’ But it was great!” Asked to define the word typical, she says, “Oh, you know. I’m growing up. I was afraid it was just going to be, um, kind of ‘kid-ish.'”

“Right,” she nods, dramatically rolling her eyes. “But I think even seventh graders would like Hercules.”

“Especially the part where he cuts the hydra’s head off from inside of it,” Almost Ten glowingly affirms. “Boys will think that’s pretty nice.”

Lunch, it was earlier decided, will be at McDonald’s. (“To check out how cheesy the ‘Hercules’ happy meals are,” I was solemnly told.)

Somewhat to my surprise, their admiration for the film is real. The songs were “great,” the monsters were “cool,” Pegasus was “cute,” Hercules was “interesting,” the gods were “very cool,” Hades–the bad guy–was “funny,” and Megara–the movie’s tough-talking anti-heroine–was, well, she was . . .

“Here’s the deal with Meg,” Eleven says. “I liked her. But she was really skinny. All the Disney females are always really skinny, with really big . . . ,” she pauses. “Can I say the word breasts in the newspaper?”

“She looks like Anorexia,” Almost Ten chirps. When she sees my surprised face, she adds, “From that other movie.”

“You mean Anastasia,” laughs Eleven, referring to the heroine of an upcoming animated film from Ted Turner’s company. We saw the poster. “Anorexia is when you’re too skinny but you think you’re too fat.”

“You know, there are people who think that Disney movies are bad for girls, because it makes them think that they should look the way the female characters do,” I tell them. “With tiny, tiny waists and really big . . .”

“Sometimes I wonder what I’m going to look like when I start to, you know, to develop,” Eleven admits, modestly lowering her voice. “But I think I want small ones, so boys don’t stare at me all the time.”

“Boys do like you better when you have big ones,” Almost Ten says, knowingly. Instantly red again, she adds, “Don’t they?”

“Hmmmm,” I stall. “Some would say you just proved the point about Disney movies.”

“Girls don’t have to learn that from a movie,” she insists. “Girls just know that.” There is a long, thoughtful pause after which Eleven reaches out to take my hand.

“And Dad?” she says brightly. “If you do use our real names? We’ll break your fingers.”