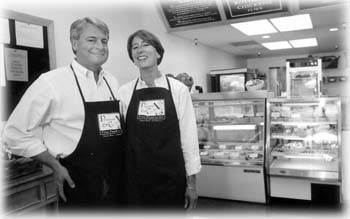 Pearson & Co. makes it easy to eat at home

SOCIOLOGISTS are always telling us that the stressful pace of life in the ’90s necessitates making compromises and learning to do without some of life’s simple pleasures–dining, for example. They reason that when both partners work for a living, no one has time to cook dinner.

But does dining well always mean having to dine out? If we agree that hiring a personal chef is not an option for mere mortals, how then can we relax and enjoy restaurant-quality food in the comfort of our own kitchens?

Yes, it’s always been easy to pick up a good pizza or Chinese dinner and bring it home, and, yes, we are blessed with several outstanding delicatessens–Traverso’s and Food for Thought both come to mind. But with the possible exception of Tote Cuisine in Montgomery Village or the Mixx Express in Railroad Square, Santa Rosa has been without the kind of purveyor of take-home restaurant-style food one can readily find in San Francisco or Berkeley.

Entrepreneur Larry Pearson and his family are attempting to fill that gap. In a small storefront next to the now defunct Petrini’s, they have established Pearson & Co. Done in appetizing tones of green and white, the space is clean, well-lit, and inviting. The shelves and refrigerator cases are stocked with a surprisingly extensive assortment of wonderful foods that makes driving away with a topnotch meal a breeze.

Working from a restaurant-style menu that changes weekly, Chef Gary Jenanyan (a former coordinator of the Robert Mondavi Great Chefs program) offers simple comfort foods like whole rotisserie chickens or garlic mashed potatoes alongside such exotic dishes as the Moroccan-inspired vegetables and couscous in a lemon-mint vinaigrette or hot and sweet Asian noodles with scallion and cilantro. His repertoire includes recipes from Asia, Mexico, and the Mediterranean, as well as traditional American favorites.

A refreshing salad of bowtie pasta tossed with rock shrimp, asparagus, and cilantro and another combining crisp jicama and creamy avocado with red onion and a dressing laced with lemon, cumin, and pepper were recently featured on the menu. Main dishes might include seared salmon filets and grilled flank steak. Interesting accompaniments like asparagus, potato gratin, and a layered polenta torta make it possible to create a balanced dinner plate.

There is an obvious flair for presentation demonstrated at Pearson & Co. Many of their products are reminiscent of the food pages of Sunset magazine with its focus on the bright, colorful, and fresh aspects of California cuisine.

For those of us who like to at least pretend that we went to some trouble in creating dinner, Pearson & Co. offers a terrific array of homemade stocks, sauces, salsas, dressings, and other staples of the restaurant chef’s larder, allowing the home cook, with a modicum of effort, to quickly prepare a seemingly complex meal. Also for sale is an extensive selection of imported olive oils, vinegars, cheeses, and pastas. There seems to be a growing emphasis on stocking local breads and foodstuffs as well.

Apparently Santa Rosans have embraced Pearson & Co.’s concept of fine food to go. Most weeknights a steady procession of customers leave the store with their dinners tucked under their arms. If sociologists are correct and the too-busy-to-cook trend continues, Larry Pearson hopes to open several satellite outlets as well. We shall see.