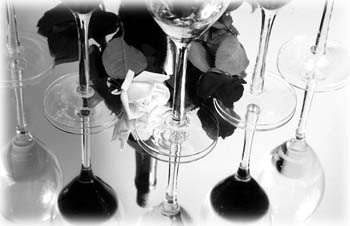 Days of Wine and Roses: We recommend six wines to nudge your memory, your tastebuds, and your soul.

Amazing grace, how sweet the taste

THERE IS ONE REASON to indulge a winetasting. There is one reason to do anything in the world. At a big tasting on a bright blue afternoon last week, I ran into two good old friends, a married couple, who enjoy wine as much as I do. He’s an investment adviser, she’s smarter than that. We were already a couple of hours into the affair, and he was saying stupid Republican things and she was giggling at the nonsense. We swapped laughs and stories, terrifying tales of the teenaged daughters each of us parent. The afternoon’s sunlight felt creamy and yellow, as though our bodies were bathed in chardonnay.

I thought back to another tasting a few years ago, when just she was there, roaring drunk. It had been a tough year: they’d divorced, actually, and it looked as if he was going to marry someone else.

My suddenly single friend’s eyes were fuzzy and painful as unpicked nutmegs; she drank enough that day to slur her words so the real ones couldn’t get out. Now here they were a few years later, together again and married again. They told me their daughter announced the other day that she’s not ever leaving home to go to college because she likes being around them so much. I do, too. We toasted on it.

Sometimes a glass of wine holds nothing but grace. And sometimes you find grace in a book, in a song, in the sticky palms of your children, in your true love’s eyes when you see something there you’ve never seen before and fall in love all over again. But grace sure is worth looking for, worth waiting for.

One day I pulled this, incredibly enough, out of a fortune cookie: “To understand everything is to forgive everything.” That’s the reason anyone should do anything, including drink wine.

In between stories and remembrances, I enjoyed the following half-dozen quaffs at the tasting, all from Sonoma County, all coming close to the four-star top designation:

Hanna Winery:
1996 Russian River Valley Sauvignon Blanc
FRESH AND RIPE AS A PINEAPPLE in Maui. I didn’t notice it at first, but the winemaker told me he’s got 8 percent chardonnay in this wine, and once he said so the difference became obvious. Great stuff. Three stars.

Robert Mueller Cellars:
1995 Alexander Valley Chardonnay
ALMOST EVERYONE I KNOW loves this wine, and my local wine merchant tells me he sells more of it than any other chard. It’s a creamy-smooth wine, a kind of oddity I think. I like it quite a lot, but have no idea what food to pair it with. The search continues. Two and a half stars.

St. Francis:
1995 Sonoma Valley Cabernet Sauvignon
ANOTHER EXCELLENT WINE from these consistent old pros. Pleasing, satisfying, stylish, and literate, like a Woody Allen movie. For $11, there’s no other cab that comes close. Three and a half stars.

J. Stonestreet:
1994 Alexander Valley Merlot
“SMOKY AND BLUE.” At least, I think that’s what my notes say, because at my pal’s most preposterous Republican remark his wife lurched hard to the left, dousing my tasting program with half a glass of this toasty, well-balanced wine and thus giving the Stonestreet words a new look quite like a Rorschach test. Two and a half stars.

Philip Staley:
1995 Dry Creek Valley Zinfandel, Sommer Vineyard
A ZIN IN A CAB’S CLOTHING, dark and earthy with hardly any of the raspberry flavors so trendy in zins right now. Aging might do wonders for this wine, but buy enough so you can enjoy a bottle or two with steak from this summer’s grill. Two and a half stars.

Ivy:
Ruby Cabernet
JIM FIELD, FAMOUS as the best producer of quality jug wine, makes this wondrous beverage under his “upscale” label. Ruby cabernet is a hybrid of cabernet sauvignon and carignane, and is inexplicably under-used by the industry. In Jim’s hands it produces a smooth, full, fruity wine that tastes, to me at least, round as a marble. All for $4.99–the deal of the century. Ninety-six stars.