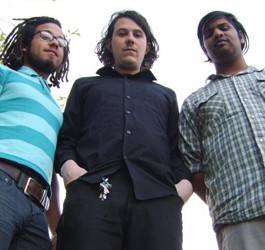 COPIA, they charge, is a gentrified waste of money that used to be a field. The Napa River is polluted. Lake Berryessa is a hotbed for date rape and random killings. Downtown clubs are full of “tourists trying to get laid” and “a bunch of people that realize that they can’t relate to anyone and they don’t know anyone and no one knows them and they’re sad.”

But perhaps the band’s fiercest and best-known quarrel is with the hometown newspaper, as evidenced in the song “Fuck the ‘Napa Register,'” which was born from coverage of two separate traffic accidents that band members say blatantly sympathized with white citizens in the wrong while insulting and vilifying black and Latino victims.

“They’re a bunch of fucking yellow journalists,” singer Kyle May, 21, vents. “[The paper] misspells, it’s written at a fifth-grade level, it doesn’t talk about anything important or real that happens in Napa, and it’s just something comfortable for the tourists to pick up.”

Twenty-two-year-old drummer Brian Montague, born in India and adopted in Napa, describes the area’s culture as “everyone trying to be accepted.” Guitarist Jakey Lieber—20, half black and also adopted—says that Napa’s youth are “paved over,” and that anything creative is relegated to the lower crust, “which is under the cement.” May, who’s half Native American, whose mom is a janitor and who, along with Lieber, grew up in a mobile home park, notes that the collective realization to embrace a low social status is what brought the band together in 2004.

As befits an outspoken band stuck in a county with few peers, the GCC are loud. Having traveled over the hill on a recent Friday night to Petaluma, the band played a set at a house party that could be heard two blocks away. May introduces songs in either a Barry Manilow croon or a Notorious B.I.G. mushmouth; Montague regularly breaks his snare drum; and Lieber, launching into the air with a gymnast’s precision, plays schizophrenic metal and hardcore riffs completely, and astonishingly, with just his bare thumb.

At the end of the set, the lights suddenly go dark. Someone rushes May and picks him up, swinging him around. Lieber’s guitar flies through the air. When the lights come back on, they’re both lying on the ground, out of breath, and May ends the show with a throat bellow that sounds like he’ll never speak again.

Not understood by hardcore bands, indie rock bands, screamo bands or metal bands, the GCC connect best, they say, with older people who were into DIY culture before the genre lines became so rigid, a mentality they professionally mock. Introducing the song “A Broaphobic Nosebleed,” the band rip off their shirts, exaggerating the jock mindset in punk rock with hilarious buffoonery while also spoofing the guttural gurgles of death metal. They’re known to bring free punch and cookies to hardcore shows.

So how does a band like the GCC get by? “Passion and heart” is how Montague describes it. Getting out of town on a couple mini-tours of the Pacific Northwest helps. The band also recently released a 7-inch, Ice Eaters, and is working on an upcoming EP.

Utilizing frustration and turning it on its ear with humor and expression is rare in a city like Napa, which offers few opportunities for its creative youth. Still, the relationship seems symbiotic—the band is a product of its stifling hometown just as much as Napa desperately needs a band like the Grand Color Crayon.

“We’re not gonna own shit in our life,” May explains without a drop of regret. “We’re poor in a nice community, where it’s like, ‘Hey, we’re safe.’ So we own this shit, dude, let’s turn it over on its fuckin’ edge.”[Marker]

Just don’t expect to read about it in the Napa Valley Register anytime soon.

For more, go to www.myspace.com/dagrandcolorcrayon.