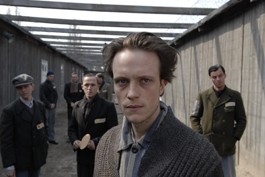 Money buys a few more weeks of life in 'The Counterfeiters'

J ust when there seemed to be no new cinematic stories to tell about the concentration camps, Austrian director Stefan Ruzowitzky has come up with his Oscar-nominated The Counterfeiters . Based on Adolf Burger’s history The Devil’s Workshop , this drama tells of Operation Bernhard, the Nazis’ plan to flood the Allies with counterfeit money, using slave labor in a concentration camp.

It’s a “golden cage,” observes the wiliest man in the forgery operation. He is the master counterfeiter Salomon “Sally” Sorowitsch (Karl Markovics), who is picked up by the SS in 1936, right before he’s about to leave for safer climates. Markovics’ unusual lead acting helps overcome Ruzowitzky’s too-simple template of the rogue redeemed. He is a chilled, withdrawn actor, physically something like a cross between Ben Affleck and Max “Nosferatu” Schreck.

A Jew, Sorowitsch is branded with the green triangle of the habitual criminal. After years of filthy, crowded conditions in the regular ranks of the concentration camp, Sally is brought out to work on the Nazis’ plot. His new supervisor is the same officer who arrested him years previously, Herzog (Devid Striesow), a cop turned commandant.

Sally and his team of printers, respectable bankers and engravers begin the grinding work of trying to emulate a British pound note. They eventually succeed. The bill is perfect, even down to the minute pin holes found in used English pounds. (In the days when the British didn’t have wallets, they used to pin currency to the inside of their pockets.)

As Sally lives for both craftsmanship and survival, he is fairly satisfied with the results. But he is under pressure from Herzog, and the threat of extermination hangs over the team. Burger (August Diehl), an activist printer, urges Sally to sabotage the project even while the team is toiling over their magnum opus: the American dollar bill. As the war reaches its end, the pragmatic head forger is wedged between the ever more desperate Nazis and his rebellious fellow inmates.

I have read that Ruzowitzky was not eager to give the Nazi perspective in the visuals, so he used over-the-shoulder POV shots for the inmates but not for their vicious captors. And yet as Herzog, Striesow’s performance is a debonair, shrewd one, more full of surprises than anything else in the film. (The soundtrack is different from what you would expect, too; it’s a series of Argentine tangos on the harmonica, and it sounds more like Larry Adler’s score for Genevieve than anything else.)

To further motivate Sally, and to prove his broad-mindedness about the company of Jews, Herzog brings the counterfeiter to his home one Sunday to meet his Aryan wife and kids. Herzog startles us by showing up in civilian clothes. The whiteness of the commandant’s polo sweater blazes out of this film’s chronic murk, the brightest thing in the entire movie, even though The Counterfeiters includes scenes in a gambling salon in Monte Carlo.

An engrossing story beats almost any element in a film. Even if everything else is weak, a good true-life story will stand up for itself. That’s ultimately the case with The Counterfeiters . Unfortunately, Ruzowitzky and his director of photography, Benedict Neuenfels, are apparently scared of making this adventure picturesque or pretty. They go for a neo-documentary approach that makes for reliable ugliness.

A decorative rack focus—a zoom and retreat that doesn’t give us more details of a dimly lit face—shouts out a reminder that you’re sitting in a movie theater, even more so than an ordinary, scarcely noticed crane shot or a pan. And despite the wobble and shake of the hand-held camera, we’re still apprised that we’re watching a story of gradual redemption.

One reason for Sally’s trip to the commandant’s house is partially to negotiate some tuberculosis drugs for a dying inmate. Like anyone else in a Hollywood movie, Sally follows his insistence in not sticking his neck out for anybody by a familiar tortoiselike stretch. Somehow, you wish this film was darker in its soul and lighter in the visuals.