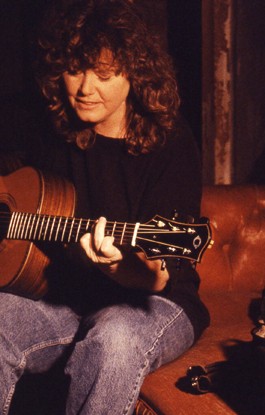 R egardless of the weather in California, it’s still deep winter in New England, where Cheryl Wheeler is having an eventful season. “I wrote a couple of songs in December, so I’m happy about that,” she reports. “I’ve been watching all the political races, and when I’m through with this call I’m talking the dogs for a w-a-l-k in the w-o-o-d-s. I have to spell it, ’cause they can hear me.”

The reason for the call, of course, is her imminent West Coast visit, which will bring Wheeler and accompanist Kenny White to the Sebastopol Community Center’s Youth Annex on March 15. Unlike many such sojourns, however, there is no new album to promote this time around.

“I would like to make another record; I don’t have enough material yet,” Wheeler says. (Her last official release was Defying Gravity in 2005.) Nor is she certain when that will change. “I used to write a lot more,” she laments. “As you get older, you’re less inclined to think that all your ideas are actually good. When I was in my 20s, if I was vaguely unhappy, I would think that was worthy of a song. Now I don’t.”

Not surprisingly, the casual quips that leaven Wheeler’s conversation are much like those that enliven her performances, if perhaps a bit more spontaneous that the side-splitting stage patter that delights her fans.

“Everything that I have ever said was in the moment, at least the first time I said it,” Wheeler explains. “But then if it works and I like it and it’s a good way to introduce the song, obviously I keep it in. My bottom line is that I’ve been hired to entertain people, that’s my job and I love doing that. And the best barometer I have is that I need to keep myself entertained, so I have to enjoy hearing it or think it’s funny. But if I feel like I’m getting sick of a little bit that I’m doing, that’s a good sign that I shouldn’t do it and it needs to change.”

But Wheeler is a singer-songwriter, not a standup comic. She balances her penchant for punch lines with a gift for crafting luminous melodies and crystalline lyric imagery, all in the service of insightful, emotionally resonant vignettes. Little wonder that her songs have been covered by such high-profile artists as Garth Brooks, Bette Midler, Kathy Mattea and Peter, Paul and Mary. She’s also penned sizable hits for Dan Seals (“Addicted”) and Suzy Bogguss (“Aces”).

But Brooks did not include Wheeler’s concluding line: “If it were up to me, I’d take away the guns.” Wheeler says the omission didn’t bother her.

“He was using the litany to make a different point, but it wasn’t that different,” she says. “My point was very specially, if we’re going to wonder why children shoot each other, I think it’s because they have guns. His point was, why are we all so violent? I mean, Garth Brooks has a whole lot more to lose than I do if he comes out and makes some anti-gun comment. I’m not rabidly anti-gun; I’m rabidly anti-gun-in-the-hands-of-school-children. Or crazy people at any school.”

But politics, like comedy, is not Wheeler’s main focus. “I have written a lot of political songs in recent times—I mean, who hasn’t?” she sighs. “But I’m sick of it all, I just want to turn away from it. There’s nothing I can do about it.

“But things will be looking up,” she brightens. “Things can’t help but look up. Unless we elect Osama bin Laden, we’re going to be better off than we are now.”