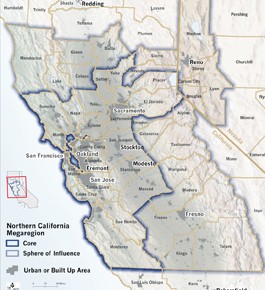 B ye-bye, North Bay. Bon voyage, Silicon Valley. Sad to see you go, Monterey Bay. You’ve all been supplanted. Encompassed. Enfolded. And not just into your granddad’s Greater Bay Area, but into a brand-new sweeping, diverse and gigantic area newly known as the Northern California Megaregion. It’s a region fanning out from six concentrated employment centers—San Francisco, Oakland, Sacramento, Modesto, Stockton and San Jose—embracing 21 counties from Yuba and Sutter in the north to Monterey in the south. It stretches from coastal Sonoma to inland Eldorado counties, and hosts 14 million people working at over 5.7 million jobs.

Born just a few days before Christmas 2007, the NorCal Megaregion’s record of emergence is as unremarkable as most birth records. It appears only as a minor note attached to a seemingly run-of-the-mill grant sought by several Oakland legislators who wanted $840 million in state funds to get cargo moving more quickly around the Port of Oakland.

The pitch the lawmakers made for the money, though, was unique: What happens in Oakland doesn’t stay in Oakland. When getting goods in and out of the port slows down due to creaky old docks, narrow freeway overpasses and twisted railroad tracks, congestion spreads outward for hundreds of miles across the whole (here it comes) megaregion.

To the immense shock of Southern California, a far longer established megaregion vying for the same funds, not only did the California Transportation Commission buy their argument and give the Oaklanders the entire $840 million, it also approved the megaregion approach for future use, inviting northern lawmakers to use it again for other big requests.

That official stamp of acceptance, in turn, energized others who had been talking about the reality of a Northern California megaregion—for quite some time—to speak up assertively.

One such entity is the think-tank San Francisco Planning and Urban Research Association (SPUR). Its executive director, Gabriel Metcalf, first ran across the concept in grad school in the 1961 Jean Gottman book Megalopolis , which focused on the burgeoning northeastern U.S. corridor radiating outward from New York City.

When, by 1967, the Regional Plan Association declared that the corridor had morphed into the “Atlantic Urban Region,” stretching from Maine to Virginia, long-term thinkers took note. In the 1980s Gottman, reviewing the concept, reported a number of megaregions bubbling up across the United States.

Virginia Tech’s Metropolitan Institute defines megaregions as those containing at least 10 million people living and working in at least two (and sometimes several dozen) cities and their suburbs linked by major transportation infrastructure and steady flows of goods and services, sharing a similar regional history and identity.

Megaregionalists argue that the cities, suburbs and exurbs conjoined into such areas cannot be realistically seen as separate population nodes, because activity involving them and travel among them—whether composed of visitors and commuters or burrito ingredients and bicycle parts—is unceasing. So if one community in a megaregion doesn’t do what’s necessary to keep the flow going—like repairing its roads or protecting against floods—it profoundly impacts the rest.

But many localities still refuse to acknowledge their interdependence and interresponsibility, and that has begun to create serious long-range consequences. Because whether we like it or not, the U.S. population has been moving en masse from sparser central continental areas into denser employment centers around the edges. America 2050, a national long-term planning group headed by such notables as Bruce Babbitt, predicts that “by mid-century, more than 70 percent of the nation’s population growth and economic growth is expected to take place . . . within these megaregions.”

There is a way out, say long-range planners: stop thinking locally and start planning globally.

Saskia Sassen, professor of sociology at the University of Chicago and London School of Economics and a major voice in regional planning, gets excited by the possibilities, describing them as “the making of new economic history.”

Her primary interest being sustainable human settlements, which she has studied at length for UNESCO, Sassen examines patterns of healthy human relations. For her, the question is how do we enhance these urbanization advantages? How do we minimize the toll of traffic and crowding and reap some enjoyment from these new far-flung and densely interwoven zones of employment, housing recreation and culture?

For one thing, says Sassen—and this is common to megaregional thinkers—we need to get over some things, like the idea that there’s something inherently wrong with human beings traveling from place to place in large numbers.

“Once you hit excess congestion disadvantages,” she notes wryly, “you might as well go for activities that benefit from geographically dispersed arrangements.” Like, say, biking between a company’s Eastside office and Westside office, which on sunny days sure beats staying indoors in a single downtown office structure for eight hours straight.

Sassen also argues for tolerating moderate dispersion, pointing out that physical togetherness is no longer entirely necessary for common experience. “Central urban density . . . has historically helped solve the risk of insufficient variety,” Sassen says, but modern digital communications assure that “wherever people are, there should be access to many of the needed resources.” In other words, telecommuting starts to make sense in megaregions.

So while Sassen certainly doesn’t shrug at irresponsible sprawl, she doesn’t hold suburban living, commutes or megaregional travel as big issues either.

This is common of many megaregionalists: what’s crucial is that the region offers a healthy mix of housing, jobs and culture and alternative ways to move among them. There’s not a lot of moralizing over how many miles a day people travel, where they go or how much time they spend doing so. To the megaplanner, it’s having a wide set of choices that matters; people will sort their own way through them. The apparent motto: Plan intelligently, then control minimally.

Edward L. Glaeser, a Harvard land-use expert who has spent many seasons crunching numbers to show that overly tight local land-use regulations, not market sloth, have produced the most severe housing shortages in the United States, agrees.

“When bedroom suburbs make their own decisions” in absence of cooperative institutions, he says, “they tend to take into account only the interests of neighboring homeowners.” Not good for planning anything from roads to parks to wildlife habitats.

His recommendation? “While, like most economists, I remain enthusiastic about the diversity and competition that comes with local control, a regional approach to land-use regulation could improve the system.”

If planning should become primarily regional, though, what would happen to that common linchpin of both Southern conservative and coastal progressive politics: an insistence on local control?

SPUR director Gabriel Metcalf, who is backing a campaign to get statewide high-speed rail on the ballot, says it’s time to reconsider this sacred cow.

“We have to realize that planning and zoning are not merely local matters,” he says. “They also determine our carbon footprint and degree of environmental destruction.”

Any jurisdiction’s failure to plan, in this megaregional age, now affects others in every direction. And therefore, jurisdictions—and their constituencies—are going to have to start cooperating.

Planners are aware that this view, which is polar opposite to the convictions of many neighborhood-centric activists, will be a rough ride for some. The resident used to demanding that her city council remove a new traffic-accelerating left turn lane on a local state highway will more frequently find that the council won’t have final say any longer. “These decisions will be made countywide, at the least,” says Papadakis. So will determinations about greenbelts and habitats and bicycle paths.

Metcalf emphasizes the benefits of embracing wider regional planning. “What we have to gain is a region that’s more affordable to live in and that can maintain its economic competitiveness.”

But he agrees that the shift may prove tough.

“Like with global warming,” says Metcalf, “we’re asking a lot of people. We’re asking them to concern themselves with things that are really big and really scary, and pay attention to much more than their own blocks or neighborhoods.”