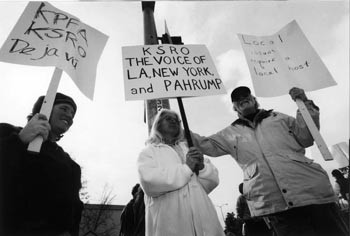 Updates on Thurston, Gray, and Ziemann

KSRO-AM RADIO fired outspoken talk-show host Pat Thurston, prompting a protest this week at the station, as well as a flood of phone calls, faxes, and letters from curious and furious local listeners. Station managers Peggy Mulhall and Brian Hudson did not return calls to explain the personnel change, but a KSRO receptionist proffered that Thurston “left on her own.”

“That’s amazing,” Thurston says of the station’s spin. “I got canned. They wanted to say the parting was amicable, and I thought that was OK. But I wanted it clear that I didn’t walk out.”

After finishing Friday’s afternoon show, the often contentious Thurston says Hudson called her into his office and let her go, citing economics and inconsistent ratings. “It is cheaper to have a syndicated show,” says Thurston, a Sebastopol resident who hosted the show for more than two years. “But I wasn’t costing them that much.”

Thurston says she “took a huge pay cut” when her former employer, San Francisco’s KPIX, dropped its talk-show format and she took the $35,000-a-year position at KSRO, which is owned by Amaturo Broadcasting.

The real reason for her ouster, posits Thurston, stems from her aeration of hot-button North Coast issues like the county’s controversial vineyard expansion ordinance and the unsolved Judi Bari bombing case.

“I am outraged . . . that now, right before an election, they yanked her off the air,” says Linda McCabe, a board member for the Sonoma County chapter of the National Organization for Women, and a frequent caller and guest on Thurston’s show. “She raised a lot of issues other people are afraid to touch. She allowed people to get on the air and discuss.”

KSRO apparently does not intend to replace Thurston in a live-broadcast talk-show format, which prompted McCabe to organize protests this week at the station’s Santa Rosa offices. “I just want to embarrass the station and show citizens that [the station managers] don’t even care about their listeners,” she says.

“They are running canned shows that you can’t even call in to.”

SURVEY SAYS? The big thumbs down for Sonoma County Superior Court Judge Patricia Gray, who had filed a complaint charging that the results of a Sonoma County Bar Association judicial qualification survey results were fatally contaminated.

After withholding the results in the race between Gray and challenger Elliot Daum pending an investigation into the complaint, the bar association board voted Monday night to release the survey, in which 72 percent of the 166 attorney respondents gave Daum marks of “exceptionally well qualified” or “well qualified,” compared to 14 percent in those categories for Gray. Fifty percent of those surveyed said Gray is “not qualified,” compared to just 2 percent for Daum.

The survey may represent opinions of a fraction of the 1,348 attorneys who belong to the bar association, but several high-profile judges seem to agree with the results.

In an uprecedented departure from the usual tight ranks of the judiciary, sitting Judges Mark Tansil, Elaine Watters, Lawrence G. Antolini, and Cerena Wong have endorsed Daum, while Gray lists endorsements from Judges Laurence Sawyer, Allan Hardcastle, Robert Boyd, and Raymond Giordano. Judge Raima Ballinger is on Gray’s list, but apparently has withdrawn her support and is now backing Elliot.

Normally low-profile, the contest for Superior Court Office No. 2 has been the most contentious county race of the March primary. Daum says Gray is disqualified three times more often than any other judge, often because of rudeness to attorneys and litigants. Gray counters that Daum is running against her because he didn’t like the tough sentences she has given to some of his clients, including an armed robber who shot Coddingtown jewelry store owner Henri Pierre last year.

Gray’s complaint stemmed from an e-mail sent by Dan Schurman, executive director of the bar association, who used association time and equipment to invite 25 people–including 12 attorneys who also received the judicial survey–to an event he was hosting for Daum. The bar association does not endorse candidates, and Schurman sent a subsequent e-mail stating that the endorsement was his individual choice.

“The issue is the bar association credibility has been tainted. I don’t care about the [survey] results,” Gray says. “The same thing happened in the last race. I was still the top vote getter, even though I was rated at the bottom [of the survey].”

FOR SANTA ROSA Catholics who feel ripped off and betrayed by the sex and finance scandal that toppled Bishop Patrick Ziemann and former diocese Vicar General Thomas Keys last year, Santa Rosa Police Chief Michael Dunbaugh has a bit of bad news: The diocese is the victim, not the parishioners or the schools who lost millions.

Dunbaugh has received calls from several parishioners fuming about the diocese’s misuse of funds donated for various church-related capital expenses. “The way the accounts were set up and the money donated, the church appears to be the victim,” Dunbaugh says. “Once I give you my money, because I’ve donated it, I’m going to trust, and the key word is trust, that you’re going to do right with it. If you don’t, you’ve certainly evaded my trust, but you may not have committed a crime.”

While Ziemann and Keys have both been accused of poor judgment and negligence, neither has been charged with criminal activity. Ziemann remains in seclusion at a treatment center in Pennsylvania, and Keys, who remains as pastor of Star of the Valley Church in Santa Rosa, has been unwilling to talk publicly about his role in the diocese’s finances. “The reality is that money depleted from deposited accounts were used for legitimate diocesan purposes. . . . There is no bogeyman stealing the money. Even lost investments are legitimate investments,” says San Francisco Archdiocese spokesman Maurice Healy. “People can continue to stay fixated or say, ‘We’re in this together. What we can do is to rebuild the diocese.’ ”

Sister Jane Kelly, a Ukiah nun whose revelations about Ziemann broke open the diocese scandal, has some advice of her own: “You make [Ziemann and Keys] come forward and explain all of this, how they spent the money and why they covered up sexual and fiscal misconduct of priests,” she says. “How can you forgive someone who won’t admit they did wrong?”

In the meantime, says Dunbaugh, parishioners can hold the church accountable by working closely with church leaders, and they can await the outcome of state and federal investigations into the diocese’s finances. “And,” he adds, “they can be very, very careful in any money they choose to donate.”

Next ArticleMusic for Kids at Risk Celebrity Concert