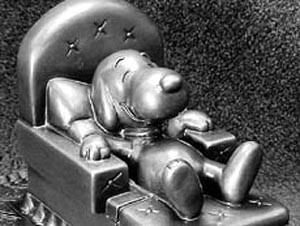 DEATH UNITES US like nothing else. The recent passing of Santa Rosa’s most famous resident, Peanuts creator Charles Schulz, brought millions of faithful fans across the world together in grief and loss.

For half a century, the cartoonist offered the wry and witty Peanuts cartoon to an audience that always seemed hungry for more. But that 50-year artistic career came to an end on Saturday, Feb. 12, when the cartoonist died at the age of 77, just hours before his last cartoon ran in Sunday papers across the nation.

The death of Schulz has lent new poignancy to local efforts to honor his lifetime of accomplishments. On Tuesday, March 7, the Santa Rosa City Council is expected to sign off on a plan to commission a life-sized bronze sculpture of Peanuts characters. The piece, which will be placed in Depot Park in Old Railroad Square, is to be created by Long Beach sculpture Stan Pawlowski, who knew Schulz well and deeply mourns his passing.

“One thing that bothers me is that he’s not going to be here to see the finished work,” says the 47-year-old Pawlowski. “He was a dear friend of mine and a huge inspiration.”

The sculpture has been in the works since shortly after Schulz announced that he had cancer and was planning to retire. The city first considered naming a street after the cartoonist, but then settled on a sculpture instead.

Pawlowski says he collaborated with the Peanuts creator to come up with the concept for the piece, which will feature a 4-foot-tall Charlie Brown and Snoopy standing side by side. A railing featuring scenes and characters from Peanuts will surround the sculpture to deter vandalism. The whole concept may evolve slightly–the artist says he’s now considering adding Woodstock.

“I am hoping that I’ll be able to install it by Oct. 2 and have it dedicated on that day, even though I’ll have to work day and night to get it done,” Pawlowski says.

The sculpture will cost the city $168,000–a bargain for a work by Pawlowski, who would usually charge quite a bit more for such a piece.

“I feel like I’m honoring him, so I wanted to do my part,” he explains.

The sculptor first began crafting Peanuts characters when he was just 17, using the newspaper strips as a model to re-create Schulz’s beloved characters in clay.

“I never imagined that I would someday be creating work for him that would be going into production,” Pawlowski says.

About eight years ago, a Peanuts licensee brought Pawlowski together with Schulz so the cartoonist could see some work the sculptor had done for Disney. The two hit it off immediately, and Pawlowski ended up getting a commission to design the Charles M. Schulz award for cartooning, which featured Snoopy leaning on an inkwell.

“When we first had a meeting he inspired me so much that I turned out five little miniatures in a month,” Pawlowski recalls. “He appreciated the detail work that I do, which inspired me to do better every time.”

Pawlowski went on to do 11 other pieces for Schulz. He says the true impact of the cartoonist’s art on the lives of his fans may never really be known.

“He’s brought such great joy to the entire world and inspiration to people he never knew,” Pawlowski says.

“He’s touched so many people. My life has been greatly enriched from knowing him, and I’m going to miss him as an artistic inspiration and personally.”