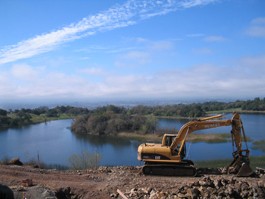 Up on the Hill

A long Fountaingrove Parkway lies the elaborately stone-covered entrance to Varenna, Santa Rosa’s newest soon-to-be completed retirement community. On the approach, a family of deer romp quietly through the grass, but once inside the job site, clang and clamor from hundreds of workmen fills the air. Our car is immediately accosted by a guy dressed in grubbies who, having evidently just lost some of his men, leans in the window. “Hey, can you guys paint?”

Nearby, a taco truck does brisk midmorning business next to two dozen new refrigerators waiting to be installed. Up the tractor-cluttered driveway, some carpet guys are overheard discussing who may or may not be drunk on the job today. And then the grand welcome: the two-tiered fountain, the porte-cochère, the arched entrance and the absolutely gargantuan main lobby. Welcome to this totally insane thing on the hill.

As the baby-boomer generation grows older, assisted-living retirement communities with onsite healthcare have become a secure, bankable industry. Just ask Aegis Senior Living, formerly known as Gallaher Construction, one of the area’s major retirement developers. Gallaher once developed single-family subdivisions in the North Bay, but has for the past 10 years built assisted-living centers almost exclusively. Fountaingrove’s lavish Varenna is in a 29-acre stratosphere of its own.

So how much does this all cost? Entrance fees for Varenna’s 250 resort-style units start at $345,000 and go up to $1.3 million; additionally, residents pay a required monthly fee of $2,700&–$5,400. Varenna’s units are not owned by residents, so these fees are essentially for the luxury of renting. And yet, even though Varenna isn’t completed, 85 percent of the units have already been taken.

“There’s been a pent-up need for something of this quality,” says Varenna project manager Bill Mabry via phone. Although the cost is high, Mabry says, there’s nothing like Varenna anywhere in the Bay Area, and “there’re a lot of people who were waiting for something like this.”

Upon move-out or death, the former resident or the estate of the deceased receives 90 percent of the original entrance fee, minus any monies owed, in case “we go into their unit and somebody had a giant beer party in there, and they threw all the chandeliers off the deck,” Mabry jokes.

While touring a model unit at Varenna, a stereo plays Tony Bennett and Barbra Streisand, softly. Hat boxes dot the walk-in closets, and bookshelves are lined with works by Mailer, Grisham and Robert Benchley. A martini shaker and a chess table sit among faux African sculptures and large prints, some of steam ships, some of flowers—victory and serenity.

Extravagance lies around every corner as one stumbles upon the wine cellar, with walls and ceiling sculpted to resemble a rock cave. Up the hill, neighborhood-style units called Casitas feature a two-car garage—with a separate, smaller garage door for a golf cart. The trip from the main patio down to the lake is made easy by a planned sky tram.

For wealthy retirees still on the fence, Varenna has a slam-dunk selling point, and it’s undeniably breathtaking: the 150-degree view looking out over the lake to the coastal mountains. Rolling by on the job site covered in sawdust, even Bob Pospisil, Varenna’s construction manager, echoes the sentiment. “It’s just kick-butt beautiful,” he agrees.

Not all is serene on the hill, however. Though Varenna was welcomed by the Fountaingrove Master Homeowners Association (FMHA), a smaller assisted-care project down the hill, also proposed by Aegis, has been ensnared in public objections from the FMHA and stalled in an environmental impact report for over a year. It’s called the Lodge at Fountaingrove, and it’s oriented specifically toward gays and lesbians.

After two and a half years, Aegis has not yet broken ground on the Lodge and Mabry says that though the costs of the opposition now are reaching over half a million dollars—an amount that would normally kill a project—Aegis remains financially and morally dedicated to the many gay and lesbian seniors waiting to move in. Asked if Aegis plans to stick with it, Mabry’s answer is swift and resolute: “Absolutely.”