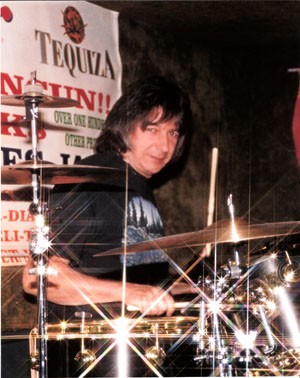 There are dozens more bands, over a hundred albums and 20 hit singles in all. Barbata tells the stories of his time in the music business in his 2005 memoir,
The Legendary Life of a Rock Star Drummer.

Speaking by phone from Oklahoma, Barbata says he took lessons from and become friends with the greatest drummer in history, Buddy Rich. “I opened for him at a gig and did a drum solo in a song. He said, ‘You’ve got a lot of balls to do a drum solo.'”

That three-minute solo pales in comparison to this one: Fourth of July, 1969, playing with Johnny Lewis at the Atlanta Pop Festival, in front of 150,000 people, the power goes out during the first song. “I started to do a drum solo, the promoter comes up to me and says, ‘Whatever you do, don’t stop playing or there’ll be a riot.’ Forty-five minutes later, I’m still playing. I couldn’t believe it.” Just when he could wail no more, the power came back on and Barbata received a five-minute standing ovation. “It was literally the night the lights went out in Georgia,” he says with a laugh.