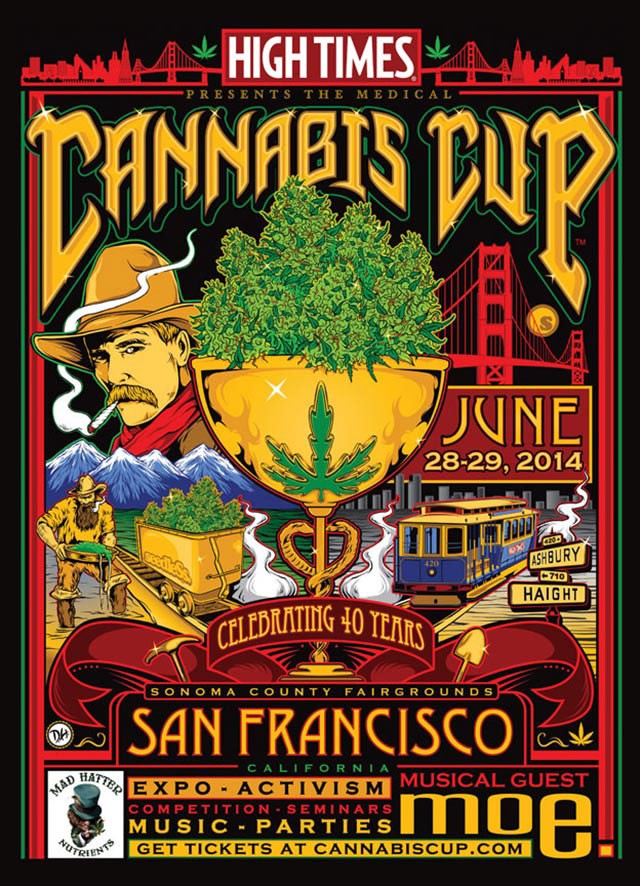 The High Times Medical Cannabis Cup is coming to the Sonoma County Fairgrounds this weekend, for a second year of marijuana-driven commerce and commingling. There will be music by Moe, a chill vibe will permeate the public lands, and the police will be called only if necessary, says Sonoma County Supervisor David Rabbitt, who recalls a fun and trouble-free 2013 event. While he’s not headed to the fair, Rabbitt says when it comes to pot legalization, “I think we’re heading in that direction.”

The Cup comes to Santa Rosa just as the U.S. Congress tells the Drug Enforcement Agency it can’t use federal funds to shut down state-licensed dispensaries. The bud is loose. According to the National Organization for the Reform of Marijuana Laws, there’s a pro-pot town hall in Missouri, hemp seeds are legally growing in Kentucky, and Jamaica (of all places) is decriminalizing possession.

In California, police chiefs helped write a dispensaries law that sets the state up for a future, fully encoded legal status for pot. That bill passed the state Senate unanimously and is headed to the Public Safety Committee after a yea-vote in the Assembly’s Committee on Business, Professions and Consumer Protection.

Meanwhile, despite our suggestion, GOP gubernatorial candidate Neel Kashkari won’t support legalization to win over a few million Californians. Keeping it illegal is one area that the candidate and Gov. Brown agree, a Kashkari spokeswoman told Debriefer. Brown and Kashkari: fracking, yes; legalizing marijuana, no.

As the battle to reopen Palm Drive Hospital in Sebastopol enters its third month, a new executive director has been installed and a doctor-led plan to reopen moves forward, even as there are murmurs about a plan for Santa Rosa Memorial Hospital to reopen Palm Drive’s physical therapy unit.

Daymon Doss, the new director of the Palm Drive Health Care District, was appointed earlier this month to replace outgoing CEO Tom Harlan, a lightning rod for critics of the hospital’s management. Palm Drive Hospital, after decades in service, was unable to pay its bills and closed April 28.

A doctor-led plan to reopen was spearheaded by Dr. Jim Gude and the nonprofit Palm Drive Foundation. Gude has since stepped back from the action. As the foundation solicits public input for its plan, the district board is reviewing numerous options. One board member described “a very credible, encouraging proposal from Memorial to take over the physical therapy center.” Meanwhile, the foundation’s red “Open Our Hospital” lawn signs are cropping up all over the West County.

Welcome to summer. Marin County sent out letters to residents last week urging them to prune vegetation back from housing and other structures. And with good reason. Fires have sparked early in the season in the woods and hills around the county.

On June 12, the Marin County Fire Department tweeted that crews were working a 10-acre vegetation fire in Samuel Taylor State Park. That blew up into a 35-acre fire, Marin County’s first of the fire season.

On June 15, a small fire popped up in Marinwood along Highway 101. A few days later, a spate of early summer blazes broke out around San Rafael; the fires were attributed to homeless encampments in the San Rafael hills.