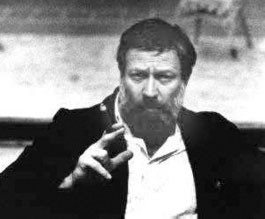 Actor-director Charles Siebert does not waffle in his opinion of Thornton Wilder’s 1938 masterpiece Our Town.

“Our Town is not just a great play, it is the American play,” he says, “and I’m always surprised when people dismiss it is as some old, sentimental museum piece. It’s one of the greatest plays ever written, a tough play, not a lighthearted, sentimental play. It’s about death, after all. Our Town is about the fact that we all die. We die and everyone around us dies. But it’s not depressing.

Siebert knows a thing or two about thrills. His résumé (not to mention his IMDB profile) describes a long and notable career in show business. After several appearances on Broadway in the ’60s and ’70s, acting alongside Fred Gwynne in Cat on a Hot Tin Roof and Dustin Hoffman in Jimmy Shine, he established himself in the world of movies and television, where he is probably best known for the role of Dr. Stanley Riverside on the hit show Trapper John, M.D. Meanwhile, fantasy geeks revere him as one of the directors of Xena, on which he occasionally appeared as the god Poseidon.

Now a resident of Healdsburg and essentially retired from show business, Siebert, an avid supporter of the Raven Players, approached the troupe with an offer to stage Our Town, a play he’s somehow never appeared in as an actor.

“No, I’ve never done Our Town,” he says, “but I remember the first time I saw it, as a young theater student in Milwaukee, after hitchhiking with some friends to Greenwich Village in New York. We saved our pennies and went to see shows as often as we could, and I remember, in the 1950s, seeing Our Town in this little theater in the village, and being profoundly affected by it. So it’s quite a thrill to be directing it now for the Raven Players.”

Our Town, which opened last weekend, is already building a surprising amount of buzz.

“For me, it’s all in the casting,” Siebert says. “I know that ‘community theater’ gets a bad reputation sometimes, but I honestly feel that my community theater cast is better, in every single role, than some recent professional productions that shall go unnamed.”

For example, in the pivotal role of the Stage Manager—the mysterious, God-like overseer who interprets things for the audience while seemingly controlling the fates of the characters—Siebert chose Alson Kemp, a retired San Francisco trial lawyer who’d never acted in a play in his life.

“He’s a very smart, talented, creative, imaginative person, and I had a hunch that he could be the Stage Manager,” Siebert says. “He’s very sophisticated, but he also has a Southern boy humanity about him. Lawyers are actors, after all, and this one has a lot of stage presence.

“We worked together once a week for several months,” Siebert continues, “and he just impressed the hell out of me. Essentially, over the course of those months, he learned how to act. He got it. He understood and absorbed what was required. And he’s my Stage Manager.”

What Siebert loves most about Our Town is its message of making our lives count not by achieving great things, but by noticing everything we’re experiencing.

“To put the highest value on the smallest things, that’s the point of life,” he says. “I think, when you see this play and you walk out of the theater, for a little while you will see how beautiful life is—even the smallest, least significant details. That’s the power of Our Town.”