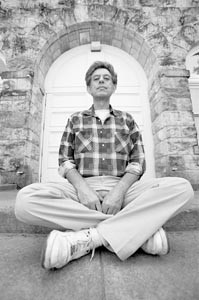 The Kids in the Hall

“THE OPEN MIKE is such a powerful thing,” says activist Kurt Erickson, a member of the Town Hall Coalition, an ad hoc group of west county residents who have taken local grape growers to task over recent vineyard expansions. “People haven’t had a feeling they can at least have a voice in what happens in this county.

“The Board of Supervisors, they’re all higher than you–you have to stand up at the podium with your butt to the audience. It’s a terrible format!”

In the past six months, town hall meetings have popped up all over the county. From Sonoma to Guerneville, Healdsburg to Penngrove, local folks have been coming out of their houses on weekday nights–even in the pouring rain–for hours of discussions on issues that arouse strong opinions: groundwater, grapes, growth and its consequences.

Has all this grassroots organizing been birthed by that mother of all meetings, the Town Hall Coalition? Since its debut last September, the THC has put a new face on rural democracy, with e-mails flying from desktop to desktop and well-attended meetings at which neighbors line up at the microphone to share their concerns.

Since THC began, supervisors’ meetings on the controversial hillside vineyard ordinance and proposed groundwater regulation have been packed with vocal opponents, and articles about their concerns have appeared in all the local newspapers.

Suddenly the prosperous darlings of the Redwood Empire–the grape growers–have found themselves on the defensive.

Certainly, the THC has put a well-timed match to a smoldering heap of discontent. THC participants are described as articulate and highly skilled, and no one seems to doubt the sincerity of their commitment to our shared future. In any case, it is clear that something is happening here, and the real target is not the farmer, but the exclusionary style of governance exemplified by the Board of Supervisors.

Lynn Hamilton, the former mayor of Sebastopol and onetime community organizer in South America, who with her husband, Don Frank, started the big boulder that is the THC rolling downhill, compares the situation in Sonoma County with a banana republic. She made her intentions clear at the first meeting: “We should begin to identify new candidates to run against these terrible supervisors–the worst Board of Supervisors we have ever had–tonight.”

Santa Rosa City Councilwoman Noreen Evans, who recently failed in her bid to unseat Supervisor Tim Smith, stepped up to bat in time to get THC’s full endorsement. She too wants to put the brakes on growth.

“The Town Hall Coalition is really about inappropriate growth,” Don Frank says. “Of course there’s going to be growth–we’re still having babies and our children will need places to live. But we’ve got a Board of Supervisors planning for more growth when they haven’t fixed the problems they’ve already got.”

He takes a fatherly attitude toward all the new grassroots organizations that have sprung up throughout the county. He points to the recent community meeting on the Russian River Redevelopment Plan, held March 9 in Guerneville, as evidence of the THC’s influence. But activist Brenda Adelman, while voicing her approval of the coalition’s progress, is quick to note gently that people on the Russian River have been organizing for 20 years.

“We’ve been here a lot longer than the Town Hall Coalition,” she says.

MEMBERS of the THC feel that they have provided “a catalyst for things that are going on by giving a voice to concerns and suggesting ways to become active,” as Stephen Fuller-Rowell puts it. He’s been active on the THC water committee, which has succeeded in pressuring the county to do a groundwater study to allay fears that vineyards may be depleting the wells. Water is a complex subject that is becoming increasingly urgent, he says, “and nobody is monitoring this.”

Fuller-Rowell has been monitoring his own well on Furlong Lane and is now offering instructions to others interested in the problem.

The THC has been effective in other ways as well.

“We’ve actually changed the semantics. Our words, like ‘industrial vineyards,’ are showing up in the Press Democrat,” Erickson says happily.

“And Kendall-Jackson has made big changes because of community concern.”

While he suggests that Kendall-Jackson decided to stop cutting vintage oaks before the THC came into existence, Robert Hopkins, a Healdsburg grape grower for 25 years, agrees that, thanks to the dialogue and the new vineyard ordinance, “people are changing the way they do things. There’s more scrutiny by Fish and Game, and many regulations that have been loosely enforced are getting more attention now.”

But he’d like “all of us to really look at the science and see what we can agree on.”

That’s what Nick Frey is looking for. As the executive director of the Sonoma County Grape Growers Association, he is concerned about a widening gap between growers and the public. He sees a lot of emotion at the meetings and some “veiled or overt threats” to turn people in to law enforcement without “talking to your neighbor first.”

Frey comes from Iowa, where 60 percent of the land is used to cultivate soybeans and corn, and no one has the money to worry about erosion problems.

“By comparison, the things that are being done here are phenomenal–and the residents think we’re ruining the environment,” he says.

Frey wants to see a change in the tenor of the conversation. “I think if we started relating to each other as people, as neighbors, we might find those problems aren’t as great as some of us think,” he says.

JOHN KING of Penngrove has a great deal to say about the work of his group, the Penngrove Area Plan Advisory Committee, which put on their first town hall meeting this month. They are primarily concerned about the potential threat to the water supply posed by Rohnert Park’s new expansion plans. But King hastens to say “we are not affiliated in any way, shape, or form with the THC.”

However, he did attend one meeting held in Sonoma and was very impressed with the level of presentation. But, for him, it’s not about grapes, it’s the water.

“A movement like this doesn’t spring up out of nothing,” says Jerry Birnhaut, one of the leaders of the Sonoma Town Hall Coalition, which came together five years ago to stop development near Jack London State Park, and succeeded.

Now grapes are at the forefront.

“People’s feeling about land is a deeply emotional matter,” he observes.

For him, the issue comes down to “whether market forces are going to control us and whether there’s no opportunity for public interest to have some say in the radical transformation of the landscape.”

Keith Abeles of the Community Alliance of Family Farmers feels that the spotlight on the vineyard situation “gets into all the issues.”

An organic farmer, Abeles is worried that farmers who grow other crops are “getting marginalized because they can’t compete with grapes.

“Our county is changing,” he says. “The rural character is evolving, and a lot of people are concerned.”

This is part of an ongoing series of articles about the public response to increasing vineyard development and to other local environmental issues.