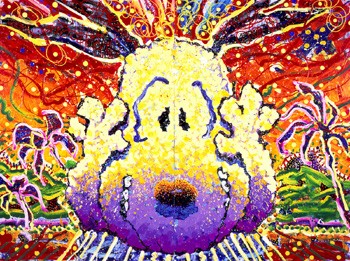 Dog Days: Tom Everhart’s work shows both an appreciation for and an evolution of Charles Schulz’s characters. Shown: ‘Nobody Barks in L.A.’

Tom Everhart is frequently mislabeled a “pop artist,” making it easy to misunderstand his lively, large-scale paintings riffing off a familiar character–in this case, the work of one Charles “Sparky” Schulz.

Everhart, speaking from his Venice, Calif., studio, says he’s the first fine artist to align himself with a cartoonist to create a body of work springing from a place of personal feeling and conscious connection. Everhart, whose show “Under the Influence” opens at the Charles M. Schulz Museum on Nov. 15, actually never thought of Schulz as a cartoonist “so much as an artist of cartoon, with the sensibilities of a fine artist,” he says.

It’s common for pop artists to appropriate a familiar icon or image to create consumer-friendly colorful reproductions or versions. Everhart’s works, however, are more about art, modification, and a two-decade friendship than about imitating isolated characters featured in a black-and-white comic strip. Although Everhart works within the limitations of Schulz’s strips, he extracts brilliant details, such as Schroeder’s toy piano, Pig Pen’s dust balls, and Spike’s tumbleweeds, to present a new way of seeing beyond what is expected.

Everhart’s long-time personal relationship with Charles Schulz was the foundation of what can be likened to the most functional of marriages. During the first decade of their friendship, Everhart worked with Schulz on special, nonstrip projects, while still pursuing his painting full-time. (Schulz was always in complete control of the strip, from development to drawing.)

After a cancer diagnosis in the late ’80s, Everhart had a wake-up call in the way he viewed the world. His own body of work (skeleton and landscape paintings) was feeling stale, so the impact of Schulz’s visual work and emotional support on Everhart’s artwork was inevitable. And although it was welcomed, it was certainly a major artistic risk.

“On the big checklist of dos and don’ts in the art world, taking a commercial character and creating a body of work from it is somewhat taboo,” says Everhart. “Take Philip Guston, for example. When he strayed from abstract expressionism to cartoon imagery, he pissed off all of the contemporary critics he hated and inspired all of the artists he liked.

“You can either face your emotions honestly or be scared to death of what the art world may think,” he says of Schulz’s trust and encouragement to balance the “Peanuts” characters within his own artistic direction and work.

When Everhart moved to Venice in 1997, the stunning surroundings of Southern California allowed his work to further grow and evolve. His vision was no longer veiled by self-imposed limitations, and he was able to look closely at wide-open spaces, like clear stretches of sky and sea, and find a renewed visual energy. His recent dot technique is a direct painterly articulation of this visual energy–from gazing at vast horizons and seeing small dots moving about. This new approach to color application is another example of how Everhart continues to be challenged and influenced by his surroundings and must constantly experience new ways of seeing.

“Under the Influence” will feature 12 full-scale paintings created at Everhart’s Venice studio. Bringing this exhibition to Santa Rosa is clearly a bittersweet event for the artist, who remembers a time before architects had been hired or ground had been broken on the Charles Schulz Museum. He and Schulz dreamed of a place that would properly show the influence of Schulz on Tom’s work. Guests who navigate the galleries from Schulz’s beautiful black-and-white ink drawings to Everhart’s energized masterpiece will witness the physical influence of the cartoonist, if they open their eyes wide and truly watch and see.