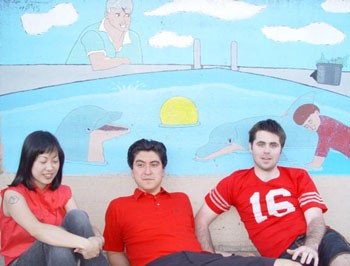 There Goes the Sun: Bright colors belie the mood conveyed by Timonium’s new release, ‘Until He Finds Us.’

Gear up for moody fall days with Timonium’s stunning release

The term slowcore is another one of those handy but ultimately annoying devices that music fans and critics use as shorthand. And just as with the genre handles of emo, punk, and shoegaze, slowcore is not exactly the most alluring of names. Apparently, slowcore’s tempo is–well, slow–and the range of dynamics it employs lists noticeably to the quiet side.

The L.A.-based band Timonium does require a bit of patience to appreciate, but labeling their output–especially their latest, Until He Finds Us–as slowcore, as a few music critics have done, is unwieldy and inaccurate. Though their music takes place in a world where edges are blurred and volume is subjective, Timonium’s inversion of the pop music equation eventually leads to a liberating musical catharsis unexpected enough to stop time for just a glorious split second.

Timonium was formed in 1994 by guitarist and vocalist Adam Hervey, drummer Adam Garcia, and bassist and vocalist Tracy Uba, who all met in high school. When Hervey departed L.A. to attend Sonoma State University in the mid-’90s, the band turned into a long-distance relationship.

While at SSU, Hervey took money he had made from acting in a Pizza Hut commercial and started a small record label, Pehr (first based in Petaluma, now located in L.A.), which has subsequently released all of Timonium’s recordings. Nearly all of Pehr’s bands (many of which are European or South American) fall into a very specific musical niche, offering minimal to no percussion and dissonant tones galore. That’s right: slowcore. But the main thread is that it’s all very pretty music, the kind of stuff indie filmmakers use to score movies about interpersonal relationships.

Timonium has always been the most accessible of Pehr bands, and Until He Finds Us sees the quartet at a peak (guitarist James Rawson has departed since the album’s recording, and Timonium is once again a trio). Until He Finds Us was recorded at Prairie Sun studios in Cotati last summer, with engineer Gene Cornelius (who has worked with And You Will Know Us by the Trail of Dead, as well as Tom Waits) at the helm.

Toms roll like a distant, muted thunderstorm in the opening measures of “Populations,” the first track, echoing the ominous rumblings in the sky that break in the middle of cloudy afternoons, muzzled and moody.

Timonium is not a sunny-day band. Their previous album Resist Education and the EP Suspende Animation were both studies in subtleties that unwound delicately, weaving drawn-out chords with the hushed vocal trade-offs between Hervey and Uba. On Until He Finds Us, the vocals function more as a centerpiece rather than additional layers of sound, as they did on previous recordings. Uba, who before was primarily on backing vocal duty, sings a lovely, understated lead on the album’s most moving tracks, such as “Across the Footlights.”

One of Timonium’s greatest gifts is their ability to make a profound impact by doing very little. With such sparse pacing and slow-motion guitar chords, when Timonium builds up to a richly colored sonic backdrop in their peak moments, it’s a thrilling revelation, as if it were the first time you’ve heard anything get loud, giving you virgin ears all over again.

By saying that Until He Finds Us is more of a rock record isn’t saying that it rocks, because it does not–and God forbid if it did, anyway. It would be missing all of its ethereal dismalness. But the songs are shorter, more compact, more concrete than previous Timonium efforts.

Until He Finds Us is the perfect rainy-day album, sharing a broken worldview that’s uplifting in its fragility, akin in tone to Nick Cave’s The Boatman’s Call, Bonnie “Prince” Billy’s I See a Darkness, and Sir’s The Night I Met My Second Wife. Indeed, I think these are all breakup albums–or at the very least albums about the human condition’s innate helplessness. Timonium’s whole album wrangles with this, in fact, on both a grand and an intimate level; there has to be some breaking up going on behind all of this.