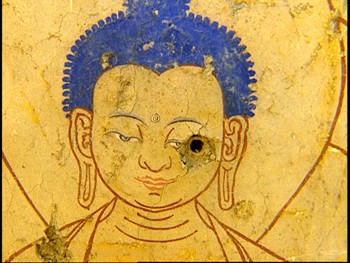 ‘Tibet: Cry of the Snow Lion’

Bullets and Riddles: The Chinese government has waged an all-out war against the ancient culture and religion of Tibet.

‘Tibet: Cry of the Snow Lion’ offers a moving portrait of occupied Tibet

Since 1950, when the Chinese first invaded Tibet and began its brutal occupation, 1.2 million Tibetans have been killed. That, according to the documentary Tibet: Cry of the Snow Lion, is one out of every six Tibetans.

For the film, which is now playing at the Rafael and opens for a week at the Rialto on Friday, a core team of four people–producer-director Tom Peosay, producer and co-writer Sue Peosay and producers Maria Florio and Victoria Mudd (also co-writer)–spent ten years traveling in and around the country. They amassed extensive material that, combined with archival images of the Chinese invasion and subsequent occupation and interviews with politicians and Tibetan activists, adds up to a powerful and motivating documentary.

Hollywood has taken the Tibetan cause under its wing; the film is narrated by Martin Sheen and features voiceovers by Susan Sarandon, Ed Harris, and Tim Robbins, as well as shots of various Free Tibet concerts staged in San Francisco and Washington, D.C. But the celebrity factor is downplayed in favor of the Tibetans themselves. Interviews with monks and nuns who have been tortured, as well as the Dalai Lama himself, bring the immediacy and determination of the Tibetan people to the fore.

The history of the country since the invasion is clearly laid out. Tibet’s position as one of the most strategic sites in Asia led to its downfall. The country sits between China and India, the two most populous nations in the world, and the narration asserts that whoever controls Tibet controls Asia.

China’s control has been complete and brutal. The Cultural Revolution, in which Mao Tse-tung committed his people to an utter destruction of their cultural history, led to the demolition of 6,000 monasteries as well as an attempt to erase the Tibetan language and culture from memory.

Historical footage of both Nixon and Kissinger in China point to the warming of relations between America and China and a resultant cooling of official American help for Tibet. Until China’s strategic importance to the United States became took precedence, Tibetan freedom fighters were trained in America.

The film is overtly pro-Tibet, though lip service is paid to the Chinese position by allowing a Chinese government spokesperson to explain his country’s position. His assertions, that China means to modernize Tibet, fall flat in the face of images of Tibetans bloodied and dying, and interviews with monks and nuns who were tortured.

The “modernization,” of Tibet means the destruction of an ancient culture. Lhasa, Tibet’s capital, is depicted as almost a second Bangkok, with prostitutes enticing Chinese soldiers into their lairs and unemployed Tibetans loitering. Tibetan culture and religion have been commodified for tourist consumption, and the film notes that a new railroad connection will exacerbate the situation. The influx of Chinese immigrants has placed Tibetans as second-class citizens.

The documentary portrays the Tibetans as clean of spirit and overwhelmingly forgiving of their Chinese oppressors–thanks to their peaceful religion. But it also points out that the Dalai Lama’s nonviolent methods may be losing ground in favor of more active resistance. The snow lion referred to in the title is the mythic Tibetan animal pictured on the national flag (which is outlawed by the Chinese). The beast is said to protect the nation, but the Tibetans may need a more forceful animal.

‘Tibet: Cry of the Snow Lion’ plays at the Rafael Film Center and at Rialto Cinemas Lakeside. Check .