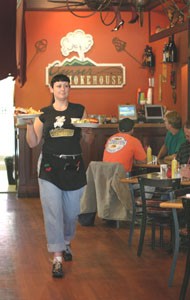 Geyser Smokehouse appeals to the little buckaroo in all of us

In 1979, when Geyser Smokehouse owner Bill Weisel moved to California, he was a little disappointed. An East Coast native, he’d grown up watching Hollywood Westerns featuring cowboy heroes like Hopalong Cassidy, the Lone Ranger, and the Cisco Kid. The Golden State was nice enough–he took to Sonoma County right away–but something was missing. Weisel found himself asking, nearly two decades before cultural anthropologist Jewel would pose the very same question, “Where have all the cowboys gone?”

A former television producer, director, and set designer for ABC News in New York City, Weisel was in the process of a fairly dramatic career change, from TV executive to home renovator. Settling in Healdsburg, he carved out a successful niche for himself renovating homes and hotels, but in the back of his mind, the absence of one of the wild, wild West’s most recognizable icons persisted.

Then, maybe five years ago, while sitting in Santi Restaurant in Geyserville, it struck him. The place was packed with patrons plenty willing to pony up $80 for dinner and wine for two. Wouldn’t they be even more likely to fill up a joint that offered similar high quality fare, but at a more moderate price? And what if this moderately priced eatery was centered around a kick-ass cowboy bar? Thus, with visions of Hoot Gibson galloping through Weisel’s head, the concept for Geyser Smokehouse was born.

Weisel purchased one of the oldest buildings in Geyserville, the Odd Fellows Hall, built in 1862. At the time of purchase, it was a foundering Mexican restaurant, but it had once been a stagecoach stop for travelers visiting the famed resorts and spas of Lake County. Weisel and his business partners went to work.

They ripped up five layers of linoleum to
get to the hardwood floors underneath, sand-blasted and sealed the dusty brick walls, installed a neoclassical tin ceiling, and then started shopping the auctions. Their discoveries included an enormous wood bar with twin columns, a knockoff of a Frederic Remington bronco-busting bronze to go between the columns, and an old hay baler that looks like a diabolical cattle guard to hang on the wall. Finishing the place out with a homemade antler chandelier and assorted rusty bits of farm machinery and cowboy tackle, Weisel’s vision was fully realized two years ago, when Geyser Smokehouse opened for business.

Geyserville is the proverbial small town that you’ll miss if you blink while passing through. It’s that tiny. But unlike other North County hamlets that were bypassed by the rebuilt 101 freeway, access into Geyserville couldn’t be easier. Coming from the north or the south, the first Geyserville exit dumps right onto Old Redwood Highway, renamed Geyserville Avenue. The Smokehouse is the place with all the Harleys parked in front.

The booming V-twin set has discovered Bill Weisel’s kick-ass cowboy bar–and why not? As noted philosopher Bon Jovi once remarked, “I’m a cowboy, on a steel horse I ride.” There’s likely to be a hot rod or two parked out front as well. Put the highway and all this glinting chrome together outside a solid brick shithouse of a building fronted by a dusty boardwalk, and it makes sense that on the menu the kick-ass cowboy bar has been officially recast as “a good time Sonoma County roadhouse with a simple country kitchen.”

The type of moderately priced food to serve was never in doubt: good ol’ American barbecue, the kind of food you might get at a stagecoach stop or on a cattle drive. Weisel and company combed the backwaters of Texas and Louisiana, searching for the perfect barbecue sauce. “I can’t tell you what’s in it without giving away the secret,” says current executive chef Josh Anderson. “Our first chef found it, and we’ve only tweaked it a little since then.” Its smoky, spicy, tangy flavor informs just about every dish in the house, from the barbecued oysters to the pulled pork sandwich.

My first sampling from this simple country kitchen was the oysters ($7.95). The half-dozen bivalves, provided by a local food purveyor who searches out the freshest shellfish available, were small and plump, broiled medium-rare in the half-shell and topped with the aforementioned barbecue sauce. A squeeze of lemon wedge, a splash of Tabasco, they’re gone. I’ve had them on three occasions, and haven’t had a bad mollusk yet.

Southwest house-smoked chicken salad ($8.95), a heap of lettuce topped with grated cheddar, tortilla strips, fresh salsa and sliced smoked chicken breast, provided a light and tasty introduction to the restaurant’s specialty, various kinds of meat slowly cooked in a gas-fired wood-burning rotisserie smoker. The smokers are manufactured by Southern Pride, a Texas company whose service reps, according to Weisel, will tell you after you’ve called and informed them you’re from California, “We ain’t gonna hold that against you.”

The gas flame never touches the meat; instead, it ignites a combination of different woods–oak, apple wood, and Chardonnay vines–in the bottom of the smoker. The billowing clouds of sweet-smelling smoke filter upward and engulf the meat. Chicken gets an hour and a half to two hours in the smoker. Ribs get three hours. Brisket and pulled pork get eight.

This process has at least two advantages over your basic backyard barbecue operation. One, it impregnates the meat from skin to bone with a rich, savory flavor; and two, it tenderizes without overcooking and drying the meat out. Got a hankering for a drumstick, gramps? No problem. The chicken falls easily off the bone, no teeth required. Same deal with the three-bone ribs (chicken and ribs sampler $16.95). But so far, my favorite is the pulled pork sandwich ($7.95). Tangy, smoky, shredded meat, not too wet, not too dry, on a white sandwich bun that soaks up the juice just right. Tastes as good as a sloppy Joe used to when you were a kid.

In typical barbecue fashion, the Smokehouse offers a variety of side dishes, two free with a barbecue plate, one free with a sandwich, or you can get them à la carte for $2.95 each–cornbread with honey butter, ranchero beans, old-fashioned cole slaw, and the like. The cole slaw has little gold raisins and the cornbread has little niblets of corn, just like my mom’s.

The beans, seasoned with chipotle and cumin, taste just like something they might serve to grateful, starving cowboys on a cattle drive. Order ’em with the shredded pork sandwich, and they throw an extra dollop of shredded meat into the beans.

Noncowboys can choose from salads and burgers, even a smoked turkey or grilled eggplant sandwich. Wash it all down with Racer 5, Red Tail, or Boont Amber Ale from the bar, take in the Remington knockoff between the bar’s two massive wooden columns and all the rusty hardware crammed between the Smokehouse’s narrow brick walls, and it’s pretty easy to see that Bill Weisel accomplished what he set out to do: create a kick-ass cowboy bar and moderately priced restaurant.

Or call it a good time Sonoma County roadhouse with a simple country kitchen. Whatever. It’s the kind of place you want to drive to in a ’57 Cadillac convertible, “with the top let back and the sunshine shining,” as child psychologist Kid Rock puts it. “I wanna be a cowboy, baby.”

Who doesn’t, at least every once in a while?