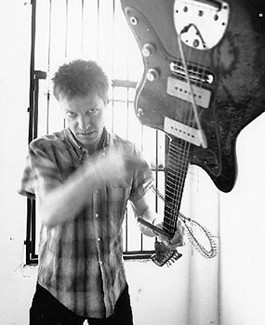 This Man Feels You

I f bodily audio absorption were a college course, the classroom could host a perfect guest lecture in the flesh-curdling guitar solos of Southern California musician Nels Cline. In a pleasant reminder that music is made up of actual sound waves floating through the air and hitting our bodies, every time I’ve ever seen Nels Cline, I’ve felt him, too. Afterwards, throbbing vibrations linger in the head more than actual notes, and a subtle disorientation testifies that I have, in fact, experienced what’s been called “the world’s most dangerous guitarist.”

The last time I saw Cline was in San Francisco as the opening act for one of his heroes, the late jazz pianist Andrew Hill. Cline’s incredibly avant-garde ensemble paid tribute to the compositions penned by the evening’s headliner, but the melodies were almost unrecognizable; the chirping horns, billowing accordion, schizophrenic percussion and Cline’s own roaring electric guitar created a beast of their own. Hill himself stood watching from the wings, surely touched and dumbfounded in equal measure.

Most people know Cline as the hired hand in Wilco, a vastly popular band that scored big in an act of renewal by offering him the very large shoes of second guitarist. With Wilco, Cline’s solos dazzle in a well-arranged fashion; he stomps on the overdrive pedal, shatters Jeff Tweedy’s sweet pop tunes into disarray, circles their remains five times over and pieces them back together again. It’s a neat trick, but it’s kind of like embroidering a Black Flag logo on an Old Navy sweatshirt, and so far, Tweedy has yet to offer Cline a tough enough fabric with which to truly interweave his talents.

Which might help to explain, in part, why Cline has remained involved in so many experimental side projects. One constant and exciting standby is the Nels Cline Singers, a vocal-less trio with longtime cohorts Scott Amendola on drums and Devin Hoff on bass. Prolific and adventuresome, the group relies more on jazz interplay than physical attack; after mixing their most recent disc, Draw Breath , they used the extra studio time to spontaneously record an entire album dedicated to the Los Angeles session guitarist Howard Roberts.