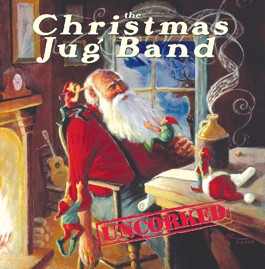 C all me Ebenezer, but I don’t do Christmas. There are several reasons for this, beginning with the fact that my father worked in the greeting-card industry for 32 years. This meant that throughout school and beyond, I could make some extra bank every holiday season setting up Christmas displays. I have been in the bowels of every major shopping mall on the West Coast.

Christmas is best shared with the little ones. The hopeful spirit of the season seen on the face of an expectant kid pretty much sums it up for me, and without any ankle-biters around, I now skip the tree trimming.

There is, however, one North Bay tradition I look forward to: the annual gathering of musicians known as the Christmas Jug Band. Approaching the Yule with tongues firmly in cheek, the members of this loose collective have been bringing their own unique take on the season to North Bay venues for 30 years.

A weekly Mill Valley jam session was the beginning of the CJB. The players insisted on using instruments true to the jug-band tradition, favoring old arch-top guitars, washboards and kazoos; any axes deemed too “good sounding” were forbidden. Dan Hicks was hosting an open mic night at the now-defunct Old Mill Tavern, and the ragtag group, many from the Commander Cody band, would gather to celebrate jug-band music. In 1977, the Tavern’s owner suggested a Christmas Eve gig, and the ritual was born.

Initially known as “The Three Wise Men + Four = One Jug Band,” the band performs throughout the Bay Area every December, and giving back, they always include at least one charity gig, usually benefiting Mimi Farina’s Bread and Roses Foundation.

The fun has spread worldwide. The German indie label Trikont has included the CJB’s “That’s His Red Wagon” on its collection of wacky holiday tunes released this year. Also new for 2007: Christmas Jug Band mini-washboards.

Country Joe McDonald has been seen warbling with the jugheads, and past participants have included Norton Buffalo and Angela Strehli. Whether you sing along to “Santa Lost a Ho” or strum your newly purchased washboard to “Someone Stole My Santa Suit,” catching a CJB show is a Yuletide treat sure to relieve the stress-induced mania that can be the holidays. Ankle-biters generally welcome.