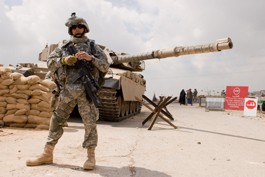 De Palma's 'Redacted' indicts all of us

O n March 12, 2006, five American soldiers gang-raped and murdered a 14-year-old Iraqi girl named Abeer Qasim Hamza near the occupied town of al-Mahmudiyah, south of Baghdad. After the rape, the troops butchered Abeer, her parents and her baby sister. A soldier who witnessed the atrocity belatedly ratted the platoon out to military authorities, who prosecuted.

Thus was al-Mahmudiyah added to the growing list of places where thousands of American soldiers have committed unspeakable acts in Iraq, including Haditha, Abu Ghraib and Fallujah. (Atrocities in Afghanistan are a related matter). The war on Iraq is the modern Holocaust. Since 1991, about 2.5 million Iraqis (10 percent of the population) have died as a result of incessant bombing, ground wars, blockades and military occupation.

Under the leadership of G. H. W. Bush, Bill Clinton and G. W. Bush, the American public has turned a blind eye to this holocaust while energy and weapons-manufacturing corporations and military contractors, such as Halliburton, Blackwater, URS and Perini, have thrived on pain.

Finally, after six years of complicity with the war regime, some in Hollywood have found the guts to challenge our Eichmannesque culture by making a handful of antiwar films, ranging from Robert Redford’s Lions and Lambs to Paul Haggis’ In the Valley of Elah to writer-director Brian De Palma’s cinéma vérité about the al-Mahmudiyah bloodbath, Redacted.

Produced by billionaire-libertarian Mark Cuban’s Magnolia Pictures, the movie was shot in Jordan. Realistically acted, the story is revealed by hand-held video cameras wielded by self-obsessed soldiers, fixed security cameras and web cams. When it was released in November, the deranged demagogue Bill O’Reilly ranted against it on Fox television, claiming that freedom of speech does not extend to criticizing American troops.

To date, only 28 movie theaters in the country have shown the astonishingly apropos Redacted, which puts the blame for al-Mahmudiyah not on a few renegade soldiers, but where it belongs: on the American people.

Be assured, it is not the violence of certain scenes that repels people from seeing Redacted; American filmgoers relish vicarious participation in murder and rape. No, movie audiences shun Redacted because they instinctively realize that a decent person cannot see this film and remain a political ostrich.

I interviewed Izzy Diaz, who plays a pivotal role in Redacted . There was no official, celebrity-spotlighted opening of the movie in Los Angeles, he said, but he attended the first showing of it. “Out of 13 people in the theater, I knew eight of them.”

He explains: “People are not yet ready to hold a mirror up to themselves.”

The Rialto Cinemas Lakeside in Santa Rosa and the Opera Plaza in San Francisco are the only two theaters in Northern California that have had the courage to show Redacted . I saw it at the Rialto with three other souls. I did not go there to be entertained. I went because it is my duty as a human being to witness the story of these crimes that were committed by my countrymen in my name. Seeing the movie was an excruciating experience, but it reaffirmed my commitment to do everything I can to help end America’s global war against humanity. It is not true that we are powerless to act against the cruel and savvy criminals who run this country, but it is true that claiming powerlessness makes it easier to stand in line at Whole Foods.

The Rialto’s proprietor, Ky Boyd, did his part: he brought Redacted to the screen and earned all of $400 in three days. Where were you, Sonoma County? You rushed to see Fahrenheit 911 , which allowed cackling viewers to blame Bush, but not themselves, for incompetence in Iraq. But you avoided Redacted , which teaches us that we are responsible for the carnage. Bush-Cheney-Rice and Congress are only as monstrous as we allow them to be. We nourish them with our silence, with the self-fulfilling mantra “There is nothing I can do.” (Say it a million times a day and it will still not be true!)

To paraphrase a question posed by one of the arrested soldiers in Redacted , “We bomb and kill these people, so why can’t we rape and kill them?” Indeed, what is the difference between bombing and raping? Netflix this film now, and discover if you can figure out that difference while continuing to live your really important life. Listen for the best line in the film, delivered by the soldier with a late-blooming conscience: “I watched it happen and did nothing to stop it.”

Be warned: If Americans continue to do nothing, then we will deserve whatever payback comes our way, be it plague, bomb, flood, the Mormons or even another Clinton.