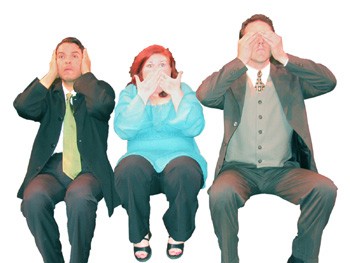 ‘IVES’ in love with language

The main problem with reviewing any play written by David Ives–including The ‘IVES’ Have It, a six-pack of Ives’ short, wacky one-acts currently being presented by the Pacific Alliance Stage Company in Rohnert Park–is that in comparison to Ives’ delightfully inspired word-game dialogue, his inventively conceived collisions of character, his fetishistic infatuation with language and his transcendentally giddy dismissal of standard play-writing conventions, all other attempts at verb, noun and adjective usage seem dry, run-of-the-mill and–ahem–boring.

For example, observe the following boring (yet necessary and informative) paragraph.

The ‘IVES’ Have It is an assortment of short one-acts pulled together from two different David Ives collections. Three plays from All in the Timing (Sure Thing; Words, Words, Words; and Universal Language) make up the first act, and three others from Mere Mortals (Time Flies; Dr. Fritz, or The Forces of Light; and Degas, C’est Moi) form the second act. In the new production by PASCO, the plays are energetically brought to life by a first-rate troupe of actors: Kate del Castillo, Shannon Veon Kase, Michael Navarra and Hector Correa, who also directs. The simple and clever set by Chris Murphy, with all its black-framed, primary-colored rectangles and nifty sliding doors that open on to a night sky of twinkling lights, manages to be both spare and colorful at the same time. Type-writing monkeys are involved. Blah, blah, blah.

Now, all of that paragraph was pretty boring (unless you are Chris Murphy), but even if I’d written it in iambic pentameter, it would have paled in comparison to Ives’ own remarkable ways with words. The thing about Ives, beautifully demonstrated in this new production, is that he tends to make people want to use words more cleverly, because the underlying point of Ives’ work, one of them anyway, is that words really do matter.

Take the first play, Sure Thing, in which a guy named Bill (Navarra) attempts to start up a conversation with Betty (del Castillo) in a small, crowded restaurant. Betty sits at a table on which is a little bell. Bill awkwardly attempts to get something going (“Is this seat taken?”), and each time the conversation hits a dead-end (“Yes, I’m with my lover. She’s in the bathroom”) one of them hits the bell, signaling the end of the encounter. The scene then rewinds to just before things went awry and proceeds anew until the next verbal mistake. It’s hilarious, and del Castillo and Navarra have the comic timing to pull it off.

In Words, Words, Words, a trio of primates (Navarra, Kase and Correa) are locked in a room with three typewriters as unseen scientists watch to see if or when one of them accidentally writes Hamlet. The monkeys would be in a better mood if they knew what, exactly, this Hamlet was, and they get closer than anyone realize (“What is Hamlet to them or they to Hamlet that they should care?” asks one frustrated chimp). The premise sounds a bit like a campfire skit at a summer camp for brainy lit majors, but Ives’ witty fusion of Shakespeare, sociology and sharp comic repartee (“You know, for apes in captivity, this is not a bad gig!”) makes it something more than a one-joke sketch, and the sight of three top-notch actors mugging madly like monkeys turns out to be pretty hard to resist.

The other one-acts range from the one-night stand of two turned-on mayflies (“I’ve been wanting to palpate your proboscis all night!”) to a bizarre language lesson between a shy woman with verbal issues and a guy spouting a nonsensical language called Unamunda.

If this all sounds weird and unconventional and slightly show-offy, it is. And then some. But that’s the point.

‘Los Romeros: The Royal Family of the Guitar’