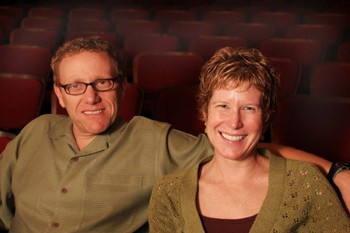 Celluloid Support: The Lhormers strive to make every filmmaker feel that his or her artistic efforts haven’t been for naught.

When Brenda and Marc Lhormer took up the reins of the struggling Sonoma Valley Film Festival four years ago, they inherited a small, provincial festival that, for all its charm and good intentions, was having a tough time making much of a blip on the wider radar of the film-festival world. The main thing the little festival had going for it–some might say the only thing–was its location in one of our state’s most celebrated and beautiful corners, a region known for its food and wine and beautiful people living in large houses with gorgeous backyards and spacious guest houses.

The Lhormers decided to capitalize on that sense of upscale rural elegance and make it a hard-and-fast code of conduct to treat all filmmakers like visiting heroes, whether they be Hollywood stars or wide-eyed unknowns with a groovy two-minute short and a history of rude treatment from “the industry.” The new and improved Sonoma Valley Film Festival became a Cinema Epicuria production (the Lhormers have formed a nonprofit that presents cinema year-round) and has been instantly legendary for its hospitality, its supportive attitude toward filmmakers of all stripes and its world-class parties to which every filmmaker was always invited.

“We work hard to make every single filmmaker feel special,” says Brenda Lhormer, just back from a week at the Toronto Film Festival, where she and Marc looked for worthy films and filmmakers to bring to Sonoma in April 2006. “It’s important to us that every filmmaker we bring feels like they’re getting the VIP treatment, to be put up in style and treated really well, because they should get the VIP treatment. When we look at what they go through to bring their visions to life, and how much they give up to get their films done, we just feel they could use a little nurturing in a beautiful spot. We are honoring them and their hard work, and we want them to go away with a great feeling.”

“It’s definitely not by accident. It’s very intentional,” Marc Lhormer adds. “Everything we do is focused on showcasing the works of these filmmakers, and one way we do that is to shower them with love and appreciation. We think they deserve it, and all of that hospitality–along with giving them at least two screenings in one of our five venues–is how we honor their work.”

While the Sonoma Valley Film Festival is as eager as any festival to feature a few big names–and past festivals have boasted such celebs as Robert Forster, Blythe Danner, Joe Pantoliano, Jena Malone, Jon Favreau and, uh, Jeff Probst (Hey! Give the Survivor guy a break! That movie he wrote and directed, Finder’s Fee, was actually pretty great!)–Marc and Brenda are clearly delighted that so many world premieres by total unknowns have taken place in Sonoma.

“It’s at the edge of the art world, where it’s not about business but personal expression, that the true original, creative voices can be found,” Marc says. “We feel that it is important and vital to support those voices and give them a showcase.”

“We are providing the opportunity for our local community and our community of visitors to be exposed to a lot of high-quality, creative, gutsy works of art that they may not have any other opportunity of seeing,” Brenda adds. “It’s a little like walking into an independent bookstore where you wander around and see all these thought-provoking things that open your eyes and your mind to topics you aren’t routinely asked to think about, ideas that you wouldn’t get in a great big chain bookstore. An independent film festival is like that. It’s a showcase for films that aren’t seen in the mainstream world. That’s why we put so much focus on hospitality. Our goal with Sonoma Valley Film Festival is to treat these filmmakers like the stars they are, because we believe that what they are doing is worth celebrating.”