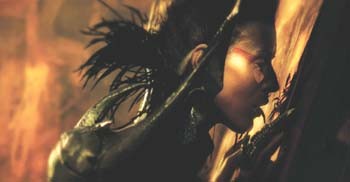 Scaree: All human eyes can divine is that this female creature is, um, licking a wall.

Mirrors create a reflection of something that presumably already exists. It is, then, particularly ironic that MirrorMask, the astonishing visual bonanza from Neil Gaiman and Dave McKean, uses them as a central theme, because this film is like nothing you have ever seen before.

Putting cinematography and art design aside for a moment, the film is a surprisingly resonant and well-developed story. Teenaged Helena Chapman (Stephanie Leonidas), the daughter of circus folk, wishes for nothing but a normal life. Filling her time in between juggling acts by creating starkly original works of art, the young girl regularly fights with her parents about their chosen career. But after a particularly nasty spat with Mum (Gina McKee), Helena is shocked to find her mother sent to the hospital, gravely ill.

Wracked with guilt, Helena goes to sleep the night before her mother’s surgery and finds herself in a peculiar land populated with abnormal creatures and an even more abnormal landscape. Soon our heroine embarks on a quest to find “the charm,” a MirrorMask that can save the good queen of the kingdom (also played by McKee) and send herself back to the real world.

Gaiman and McKean have both made their names in the comic-book world, contributing to heavyweights like Hellblazer, Arkham Asylum and Sandman (the latter of which Gaiman created). The duo also have respectable careers in more mainstream circles, with Gaiman writing several well-received novels and children’s books, and McKean providing his art for coffee-table books, album covers and the occasional original masterpiece for the wall.

For their first film together (both came up with the story, then Gaiman fleshed out the script while McKean designed and directed), the duo enlisted the help of the Jim Henson Company to add a wistful and childlike quality to their innovatively twisted designs. The result is an eye-catching comic book come to life.

The movie is imbued with a unique visual sense and flair for the dramatic, a nightmarish and epic daydream. The Ralph Steadman-influenced look of Helena’s art (and, subsequently, the alternate world) creates something darkly fascinating and creative.

Aside from the Chapman family circus (which comes off as a hyperstylized combination of Barnum and Soleil), the real-world scenes are oddly drab, as if the filmmakers didn’t see any point in making reality all that interesting. But this works out just fine because the fantasy realm is a visual cornucopia that heartily overshadows the framing story anyway. Once we are thrust into the magic kingdom, mise en scène and composition are used to their utmost capacity. Every frame is artistically and tastefully overflowing with dynamic, exceptional characters and surroundings.

Using an all-CGI-animated template for the background helps give the film a look that seems to mix Sky Captain, German expressionism and MTV’s Liquid Television. The population, whether they are digital creations, astoundingly lifelike puppets or just extensively made-up Homo sapiens, are all interesting in their own way; style and personality are clearly and painstakingly given to every creature who roams this warped land.

Traditionalists and the faint of heart should be warned that this fantasy world easily becomes overwhelming. All the digital graphics, skewed perspectives and stylized shadows could very well distract and even annoy those unprepared. Some imagery is also genuinely unsettling, as when the dark queen literally spits up shadow creatures to rampage the kingdom. The story itself takes more than a few cues from its “little girl in a dream world” genre companions The Wizard of Oz and Alice in Wonderland. But despite any minor flaws, this is a magnificent film of unabashed artistic grandeur.

‘MirrorMask’ screens at the Smith Rafael Film Center for one week beginning Wednesday, Sept. 28. 1118 Fourth St., San Rafael. 415.454.1222. It is tentatively scheduled to begin at Rialto Cinemas Lakeside on Oct. 7.