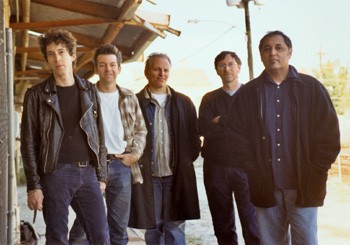 After almost 20 years together, the five members of the Iguanas are well accustomed to long stretches away from home. But their current tour is different.

“These days we are nothing but on the road, since we aren’t allowed to go home,” sighs Joe Cabral, speaking by cell phone on the way to a date in Richmond, Va. Two and a half weeks after Hurricane Katrina slammed New Orleans, home to the Iguanas since the mid-1980s, the band have no idea when they will see it again. So on they trek. “It seems like the most normal aspect of our lives at this point is showing up and doing gigs,” Cabral continues, “because every thing else is pretty much . . .” He pauses, choosing his words carefully. “. . . not the way it used to be.”

New Orleans is the home of choice for a band that initially came together in Colorado, where Cabral and one-time Sebastopudlian Rod Hodges paired up, discovering that their common musical inclinations included the traditional music of their Mexican American parents. “My father’s a musician,” Cabral explains, “and I grew up playing stuff in his band. As kids, we went, ‘I don’t want to do this music; this music is for old people.’ But then later on it was like, ‘This music is cool. Let’s see what we can do with it.’ So that’s how it became part of our sound.”

A key part of that sound is Cabral’s frequent use of the bajo sexto, a 10- or 12-stringed guitar that traditionally plays both bass and rhythm parts. Historically a key element in conjunto music, it serves the Iguanas as both sonic seasoning and a bridge between the disparate styles they embody.

Moving through various bands together, Hodges and Cabral assembled some likeminded fellow players, and then looked for a base of operations. “And we thought, New Orleans is a great city for music, and all the music that we dig originates from there, so let’s go there.”

Once in the Crescent City, the band and their groove-laden blend of rock, R&B and conjunto found an immediate comfort zone. “People were going, ‘Wow, dig this! Here’s a Mexican band, in New Orleans of all things.’ And it somehow fit with the vibe of New Orleans.

“If you think of the Gulf Coast sound as stretching from down in the valley of Mexico all the way over to New Orleans and then down to the Caribbean,” Cabral continues, “that’s sort of what our stuff encompasses. It wasn’t at all strange or odd for a band like us to have emerged from the musical fabric of our dear, ill city.”

The Iguanas had wrapped up a series of dates on the East Coast and were headed for home in late August. “We were scheduled to fly back into New Orleans the day that Katrina made landfall,” Cabral recounts. “We were all diverted to various airports; some of our families had gone to Houston, some had gone to Memphis, some to Birmingham. We thought the hurricane would blow through and we’d be gone a couple of days and then we’d go home and start pickin’ up the pieces, but obviously that hasn’t been the case.”

The good news is that all the band’s families are accounted for, and Cabral says the fragmentary information available at the moment suggests his band mates’ homes may have dodged the flooding and experienced only some wind damage. But he has not been so lucky.

“I have four feet of water in my house; I just found that out yesterday. The front glass was broken out of my house and water was in there, and I don’t know how long it had been sitting. A friend of mine was there yesterday, peering in, and they were,” he pauses again, “very disheartened and really not very encouraging. So my place is a wreck.”

Not knowing when they will return home or what will await them when they do, the Iguanas find what solace they can in their music. “That’s the most normal thing, at this time, you know?” Cabral says simply. “When we step up to play, we’re all prepared as well as we can be, so we’re able to focus and let the music carry us along.”

And is anything different about their shows now? “People say, ‘How do you want us to introduce you?'” Cabral answers.