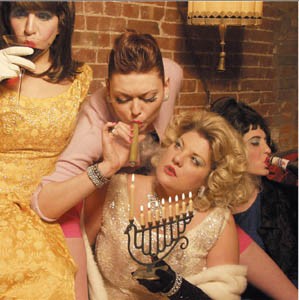 Go ahead, light another stogie off the menorah: The ‘Girls’ blow a raspberry to reverence.

Just in time for Rosh Hashanah, ‘Jewish Girls’ brings the house down

It may sound like a niche adult DVD or a hidden-camera show on a women’s cable network, but Nice Jewish Girls Gone Bad is something else entirely. The creation of New York City-based performing arts maven Susannah Perlman (one of those rare poly-hyphenates who sandwiches “chanteuse” between “comedian” and “producer”), Nice Jewish Girls Gone Bad is part musical and comedy revue, spoken-word and burlesque show that takes off the borscht belt and whips your ass with it. The girls go bad Sept. 30 at Guerneville’s Russian River Resort.

Perlman, who has appeared in many national fringe festivals, on the Learning Channel and MTV and released the albums Beating Around the Bush and Goddess Bless America, was a good little Jewish girl until her bat mitzvah, which she says devolved into some order of clandestine teen booze fest.

“I went to camp, I went to Israel, I lived in a Jewish co-op, I did Jew-y things my entire life,” she recalls. “I’ve never been good at listening to my mother even though, sadly, she’s always right. Bad is a state of being–going your own way and doing your own thing and swimming against the tide. Does that sound too cliché?”

Perlman is good-humored, pretty and possessed of a self-effacing charm. She is as much a businesswoman as she is an artist, and her passion for her production and her performers is palpable over the phone during an interview she squeezes in while preparing for a surprise party.

Two years ago, Perlman began cruising New York’s performing arts spaces for talented women who were also “MOT” (what she calls “members of the tribe”) after she conceived the concept of Nice Jewish Girls Gone Bad. “I’d start off the same way: I’d sit down, I cross my arms and say, ‘I saw the original cast of Cats–what the fuck can this bitch do?’ You know that sort of attitude us New Yorkers have towards one another,” she snickers.

“I like the whole burlesque genre, but I liked all these different things that sort of fit that sort of Jewish, comedic, quirky kind of thing. Also, at the time, I was producing a lot of women’s shows, which had different degrees of success,” she says. “I’d been doing these eclectic women’s shows for what seems like a million years and I’d be promoting to a very small audience: straight women and lesbians. There’s nothing wrong with that, they’re a great audience. But it was like, all of a sudden, when I narrowed the scope and made it Jewish women, then our audience broadened out. All these people said, ‘Let’s go see the crazy Jews!’ It’s interesting.”

Since then, Perlman has assembled a garrison of 25 performers from whom she culls the various incarnations of NJGGB.

The current lineup features five performers whose talents include, according to Perlman, “Hula hoops, a fat lady singing, kick lines, hilarious comedy.” In short, a burlesque of Old Testament proportions.

“It’s campy, it’s kitschy. Anyone who would like Bette Midler would like this show,” says Perlman. “The show is different every time. I’m the same, but my material changes from season to season. I’m the ringmaster, I’m Mrs. Partridge.”

Finding an audience when on the road hasn’t always been easy for the girls. There was, for example, the time when they found themselves at Cal State Chico on the wrong day due to a booking error.

“It was horrible,” Perlman laughs. “We were running around the campus looking for Jews. I don’t know if you’ve ever been to Chico–there aren’t any. We’re tapping people on the shoulder and asking, ‘Do you know any Jews?’ No, nobody. We’d say, ‘But you look Jewish.’ It was ridiculous.”

Perlman doesn’t outwardly politicize her act; it’s not the kind of material engineered to break cultural stereotypes so much as revel in them with cheeky irony. The group’s press materials crow, “These bad-ass chosen chicks boldly dare to deconstruct years of tradition, expectations and guilt.” More specifically, it seems, NJGGB is a parody of the crass caricature implicit in the stereotypes of Jewish women themselves, and is effectively a parody of a parody, and all the funnier for it. Moreover, Perlman and her performers shatter cultural preconceptions of themselves by virtue of the very lives they lead.

“I think most of us in the group, in our own way, are walking examples of breaking-a-stereotype–mainly, I think for a lack of money, which is not all that JAP-y,” she wryly explains, referring to the acronym for the slang “Jewish American princess.”

Perlman describes herself as reformed rather than religious, claiming to be “your standard American Jew.” The same could be said for the rest of the girls. The only departure from the cliché is that they’re all city girls rather than suburban, Perlman explains.

With this incarnation of NJGGB, it’s as if Perlman has assembled a cadre of James Bond villainesses, an all-girl version of SPECTRE, each with a special skill used to slay audiences. Like Hula-Hoops.

“I don’t know if you’ve ever seen someone hula-hoop,” says Perlman by way of introducing the single-monikered Kalki, an Australian performer who generates enough centrifugal force in her hips to keep multiple Hula-Hoops a-spin. “She takes this to a different level. It’s like Olympic proportions.”

Of course, there are those who may kvetch over Perlman’s lampoon of Judaic traditions, like her brother the rabbi.

“My brother doesn’t talk to me. He talks to my mother who talks to me, who tells me what he thinks. I don’t know if ‘proud’ is the word. I think he admires it. He’s seen it. I don’t know if it was his cup of tea, but I do bring our people together. So, I do what he does to some degree.”

In the end, for Perlman, it’s about getting tushes in seats, Jewish or otherwise.

“We definitely have fans, the more and more we get around. We see people in the audience wearing our T-shirts and people come back especially since the show is different every time. They’ll bring their friends. But when I say we’re the female, Jewish, Phish–well,” she chuckles, “probably not.”