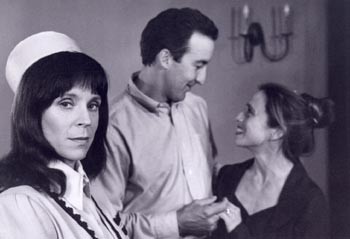 Here’s Lookin’ at You: Sheri Lee Miller, left, is Jackie-O in ‘The House of Yes.’

‘The House of Yes’ scores a hit

IF WOODY ALLEN’S GAG, “I’m writing a non-fiction version of the Warren Report,” was a benign antecedent of the shift in national consciousness about conspiracy theories, then Actors’ Theatre’s production of playwright Wendy McLeod’s black comedy The House of Yes, under the admirable direction of Tim Hayes, represents its present evolution. The centerpiece of this play is an incestuous act predicated on a re-enactment of JFK’s assassination: gunplay meets foreplay on Mom’s couch.

In the midst of a raging hurricane, the dysfunctional Pascal family of McClean, Va. (a tony suburb of Washington, D.C., circa 1983), eagerly await the return of elder brother Marty (Dodds Delzell). More inclement than the storm, however, are the reactions of Marty’s mother (Laurie Whiteside) and his deranged twin sister, Jackie-O (Sheri Lee Miller), when, upon his arrival, he presents Lesly (Sallie Romer)–his unexpected and lissome fiancée. Of course, Anthony (Cameron McVeigh), the callow kid brother and recent Princeton dropout, is smitten with the outsider.

Complicating matters are the unsettling proximity of the remaining Kennedy clan (next-door neighbors) and, more significantly, Jackie-O’s blatant sexual longing for her twin brother (she is said to have clutched Marty’s penis in utero).

Miller is nothing short of stellar as the hostile, enigmatic twin. A wellspring of contradictions, Miller’s Jackie-O is both tempestuous and tragic, fratricidal yet incestuous, empowered but victimized.

The straight man to many of the antics of Miller and company, Delzell’s Marty is a deftly crafted totem of aspiring propriety who visibly transforms as Jackie-O systematically skins him of his façade, revealing a morass of like impulses. A keen actor, Delzell makes his understated approach a fine counterpoint to Miller’s capriciousness.

McVeigh’s doting and devoted Anthony drolly conveys the mental scarring acquired as his older sibling’s psychological chew toy. McVeigh is a subtle physical comedian whose suggestive gesturing and deadpan manner not only achieve laughs but reveal the psychic innards of a character that becomes increasingly complicated.

Sallie Romer’s Lesly capably carries the torch of reason and serves as an effective foil, making for a comforting touchstone when the audience begins to grope for the reality they left at the theater door. Also finely hewn is Whiteside’s portrayal of Mrs. Pascal’s resignation and denial, becoming all the more lurid in contrast to her sardonic performance.

Designer Vonnie Johnson’s costume selections are apropos for the era, but it is the replica of Kennedy couture worn by Miller’s Jackie-O that is Johnson’s genius. Miller is clad in a faithful reproduction of the raspberry wool Chanel outfit and pillbox hat Mrs. Kennedy wore in the Dallas motorcade. As mandated by MacLeod’s script, the outfit is garishly slopped with faux blood and strewn with macaroni in emulation of the medulla oblongata once in the President’s skull. Sick, yes–but funny.

Autumn Wilkins’ set is a lean replica of ’80s affluence, and John W. Arnold’s stylish lighting accents and punctuates scenes with concision and clarity, as does Hamid Lock’s sound design (the hurricane’s siege seldom ebbs, and yet nothing of the actors’ intonation is diminished).

Actors’ Theatre’s The House of Yes is delectably perverse and an impeccable antidote to the maudlin drivel undoubtedly slouching toward the holiday market this season.