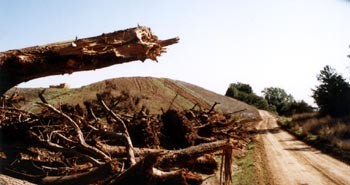 Fallen Giants: A splintered oak pierces the air at the E&J Gallo project. .

RURAL RESIDENTS in the county, savoring the rustic country landscape, face a two-pronged environmental attack on the good life as they know it. While timber interests actively pursue the mature forests of local landowners, the local $2 billion grape industry is threatening wildlife habitat and biological diversity through the aggressive conversion of hillside forests into profitable steep-slope vineyards.

That’s the perspective of environmental activists hoping the county Board of Supervisors will pass a law to stop steep-slope conversions. Mark Green, head of Sonoma County Conservation Action, says his organization is working with several other groups in the fact-finding stage of an effort to create a county ordinance to strictly regulate and limit the conversion of steep-slope forests.

In Sonoma County, landowners who want to cut timber for development are allowed to log only in small increments. But those wishing to convert to grape cultivation may clear cut their land.

The new law should be similar to a 1990 Napa County ordinance, but offering tougher protection of wildlife habitat. The coalition of environmentalists expects to have its proposal clearly defined by year’s end, when it will push county supes to pick up the cause. “Vineyards should not be built on these very steep slopes, and oak woodlands ought to be left as oak woodlands,” says Green. “Because habitat fills to capacity, if you take out a whole bunch of habitat, all the animals do not move next door, since next door is full. So they die.

“The conversion of the county in the monoculture of grapes is not in the interest of the biological health of the county, or in the public interest, particularly when you tie those issues to issues of sedimentation from erosion, which goes directly to the threatened coho salmon and steelhead.”

Organizations working with SCCA include Friends of the Russian River, the Westside Winery Group, the Russian River Task Force, the California Native Plant Society, and the Audubon Society. “It’s a vital, diverse, and skilled group,” says Green. “They’re sharp people who have done a lot of politics. Something is going to happen.” According to Green, about 1,500 to 2,000 acres are converted to vineyards each year.

The most dramatic case of hillside vineyard conversion is the proposed 500-acre vineyard project by E&J Gallo Winery on Westside Road in Healdsburg that aims to convert 174 acres of forest. The California Department of Forestry has required Gallo to get an environmental impact report for the wooded portion of the plan, but normally conversions of hardwood forests without conifer trees do not require a timber harvest plan and are loosely regulated, according to activists. Two weeks ago, Gallo representatives announced that the company will delay the timber harvest plan for a year, though it has not withdrawn its application to cut down the trees. In fact, work already had begun on the property, with several large oaks lying toppled or broken on the land.

While Green describes aerial photographs that show “huge scalped-off areas of oak woodland that are being converted into vineyard” and “look almost like bomb craters,” Rick Theis, executive director of the Sonoma County Grape Growers Association, says any accusation of vineyard industry malpractice applies only to a small minority. “We’ve got 90 to 95 percent of the growers out there who are doing things right,” says Theis, referring to erosion control. “Five percent of the people out there are causing a serious problem.”

THEIS, Judy James of the Sonoma County Farm Bureau, and Bob Anderson of United Winegrowers for Sonoma County don’t react to the question of wildlife habitat, but point a collective finger at the lack of anti-erosion measures taken by some small-scale newcomers to the vineyard business.

“It’s an attitude,” says Theis. “They are generally property-rights advocates who say it’s my property and I can do anything I want with it.

“Usually they are fairly wealthy and want to come to Sonoma County to live the life of a gentleman farmer. They’re wealthy because they are stingy people when it comes to spending money. They are not willing to hire the right people to do the job.”

Ironically, the three agricultural trade organizations say they have complained to state officials about not enforcing existing water-quality and wildlife-protection regulations. Lack of enforcement, they say, has contributed to the current movement to prohibit hillside conversions.

“Erosion is only a small part of the larger issue here,” responds Green. “We are talking about the conversion of oak forests, coniferous forests, wildlife habitat. Gallo did that. Kendall-Jackson is doing that. It’s not just little people who are doing that. It’s everybody who’s converting these habitat areas on the hillsides. In terms of the eradication of habitat issue, which is primary, the major players are doing that aggressively.”