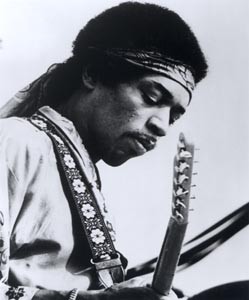 THE RECENT REISSUING of
Jimi Hendrix’s recordings through his family’s supervision continues with stellar results on South Saturn Delta. This batch of rare cuts and loose ends complements First Rays of the New Rising Sun, which was released earlier this year in an attempt to assemble what Hendrix’s fourth studio album would have been (like Cry of Love and Voodoo Soup) if Hendrix’s untimely 1970 death hadn’t cut his career short. South Saturn Delta takes in demos with the Experience as well as restored mixes of work with his later funk-rock ensembles, such as Band of Gypsys, and–as usual –the annotated booklet is superb. Hendrix’s mastery of blues vocabulary was always full of pop instincts, abstract flare, and screaming guitar dynamics. The title track, with sax, horn, and guitar interplay and odd rhythms, is still unlike anything we’ve heard since.
–Karl Byrn

FEW PERFORMERS emerging from the ’60s folk revival display as much raw instrumental power or the uncanny ability to interpret songs as singer, songwriter, and guitarist Richie Havens–the Woodstock-era icon often heard on TV jingles. This new CD, featuring for the most part previously unreleased material from 1970 and 1972, captures Havens in his prime, forcefully rendering works by Bob Dylan, Fred Neil, and George Harrison, among others. The earlier Cellar Door sessions–driven by his percussive, strummed-guitar style and slightly hoarse voice–spawned the hit single “Here Comes the Sun,” the Harrison composition from Abbey Road. But the rest of these live tracks–including a soulful version of Billie Holiday’s “God Bless the Child”–languished for more than 25 years. Today, they cast a warm glow that, while echoing the social and political turbulence of the times, blankets the listener in a comforting, sonorous aura. Great stuff.
–Greg Cahill

Everclear
So Much for the Afterglow
(Capitol)

EVERCLEAR SHINES among the many one-hit wonders left by the ’90s alt-rock explosion. The catchy abandon of their 1996 hit “Santa Monica” (with its rollicking chorus of “I don’t wanna be the . . . baaaaaad guy!”) drove the disc Sparkle and Fade to platinum sales, but oversaturation on radio and MTV quickly made the group objects of hip disfavor. Sparkle and Fade was meatier than that sharp hit, as frontman Art Alexakis expressed a compelling, explosive, and highly personal version of the post-Nirvana punk/grunge formula. Everclear’s not-so-subtly titled So Much for the Afterglow blares a bit more gingerly down that same path: The songs are less confessional stories than accusatory portraits, and the crescendoing fervor of delivery is now a more even pop-punk shuffle. The jerky, two-note riff from “Santa Monica” appears again in “I Will Buy You a New Life” and “Father of Mine,” and even surfaces in the metallish instrumental “El Distorto de Melodicas.” Banjos, organs, and nods to the Beach Boys don’t quite freshen the sound, and as if to acknowledge the difficulty in making a dynamic follow-up, the band delivers the song “One Hit Wonder” as though it were an anthem. If So Much for the Afterglow isn’t Everclear’s glory moment, Alexakis’ ragged quest to break from a lost past into a brighter future still gives Everclear its kernel of truth.
–K.B.