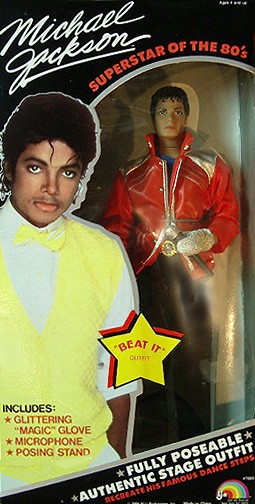 A doll. I loved Transformers and G.I. Joe like any other 5-year-old boy in the early ‘80s, but I also owned a goddamn Michael Jackson doll, with the one little glove and everything. For me, there is no better symbol of how pervasive a presence he was at the time. Right there in my memory, alongside Russian vilification, Jack Tripper, Sesame Street, and my first bike are the music videos of Michael Jackson. “Beat It”, “Billie Jean”, and of course the mini horror film “Thriller” were the most exciting things on television, period. While Jackson breaking the color barrier on the powerful new MTV has been well documented, this importance cannot be overstated.

Aside from timeless songs and exhilarating dance moves, the reason Jackson affected little brown-skinned me in a way that Bruce Springsteen, Duran Duran or Wham! never could is the same reason President Obama could repeat the Bush Administration travesties tenfold and still be eternally beloved.

Let’s face it. Role models and paradigms do matter. Imagine never seeing anyone in a position of great power look remotely like you do, in politics, the arts, entertainment, etc., The reflection of your image in “the upper crust” or “the beautiful people”– or lack thereof – is an awesome force. Michael Jackson’s worldwide popularity was a new phenomenon that has yet to be replicated. Like the Beatles decades earlier, Jackson’s appeal was truly universal: the girls loved him and the guys wanted to be him – everyone, all around the world. Virtually every child of the ‘80s has tried his moonwalk, leg kick or countless other moves seen in his videos. And, of course, the music was outstanding, so critics approved & the songs became classics. To this day, Thriller is the best-selling album of all time.

Most astounding was that, despite the nose job, he was black. Black black. I mean, not even that light-skinned. A full decade before the term “African-American” entered the cultural lexicon and hip-hop style dominated youth culture, this was a huge deal. And no other black entertainer has achieved that kind of widespread pandemonium. Sure, New Edition, Boyz II Men and B2K were popular, but not when compared to what the New Kids on the Block, Backstreet Boys or NSYNC sold in music and merchandising.

Michael Jackson was no Little Richard, left to watch Elvis Presley’s ascension from behind commercial and societal barricades – he WAS Elvis. He had the voice, the pelvis, and the vaguely androgynous style, and people could not get enough. In the music world, “Michael” (the most common name in the English language) would only mean one person (basketball’s a different story). By the end of the decade, suburban kids were trying to grow their hair like Axl Rose or Joe Elliot, but for a short time the coolest guy in the world had a Jheri curl. This spoke to me and countless other non-white kids in a much deeper, emotional way than any mentions of “equality” and “rights” in centuries-old documents ever could. Iconic status, being “the best” in a recognized field, was possible.

That’s why Jackson’s protracted devolution was so traumatic. When Bad came out in 1987, he was obviously much lighter than before (with an even thinner, less “ethnic” nose). As an 8-year-old, I remember hearing the rumor that his plan was to look like Diana Ross. It seemed creepy and he looked completely different, but he still had the moves, the voice, and a generally tanned skin tone.

But by 1991’s “Black or White”, his nearly pink complexion was impossible to ignore. As a 12-year-old with fond recollections of the Thriller era, I remember having trouble wrapping my mind around this. Perhaps he wants to appear as a combination of all peoples, devoid of race, I told myself. When Jackson told Oprah it was a “skin disorder” a couple years later, I really, truly wanted to believe him, especially since his tunes remained as soulful and funky ever. But it was no use.

Working against him was the fact that every date he’d appeared with publicly, no matter how farcical, was Caucasian. Then he married Lisa Marie Presley and procreated with another white woman. Big deal, I thought. So he likes white women. But as his children got older – and by no stretch of the imagination exhibited the traits of half-black kids – it was clear as day. Our black Elvis did not want to be black.

Over the years, any talent or philanthropy were outshined by two molestation allegations and a wealth of other inappropriate behaviors. I couldn’t just dismiss him as a “freak” like everyone else, because he meant so much to me during the formative years. With each bit of news, my shock and horror were compounded by his palpable self-hatred. I would try to reconcile this in my head, over and over. It made the least amount of sense out of everything. Maybe he looked too much like his abusive dad so he hated his own face? In every black woman, did he see the mother who failed to protect him from his father’s abuse?

Then I would see his blond-haired, blue-eyed kids and all the beneficial doubt was eradicated. And it stung. Although I sympathized with everything, from the appearance of body dysmorphic disorder, to the abuse he endured, to the pressure at a young age, to the fame that magnified it all, to the arrested development, it felt awful that the King of Pop himself could not happily be an African-American. A pioneer was ashamed of who he was. No matter what painful forces compelled his ongoing desire to be white, witnessing it still felt like shit.

Throughout the years I was continually amazed that many other people “of color” that I knew had the ability to enjoy and support his music as much as ever, even during the first molestation trial when the court of public opinion ruled unanimously to hang him. I was still too disturbed. Only recently have I rediscovered his art, away from his personal life. I’ve even been curious to finally check out the Invincible album. A few weeks back, my brother and I even flirted with the prospect of taking in one of his postponed “farewell” shows in London. Jackson was still a live act we just had to see in our lifetime. After a few laughs at the crazy idea, I said we’d catch his show if it came to the U.S. And for the first time since childhood, I really meant it.

I hope Michael Jackson has finally found some peace. On the verge of my 30th birthday, I realize that he was, despite the action figure I had of him, only human. His untimely death made me wonder if he was my generation’s John Lennon, Elvis Presley, etc. But his was a unique American tragedy, one where the glass ceiling was shattered, but all progress was spoiled by human foibles.

When people say we live in a “post-race world”, my scoff always ends up a shrug. There are certain things that some people will never have to understand. For the rest of us, good thing we still have Obama.––David SasonRest in peace, Michael. Hopefully, you heard Dave Chappelle’s kind words before you left this world. If not, here they are again (at 4:10) along with a triumphant moment that everyone enjoyed, hopefully you included. Thanks for the great music and dancing.