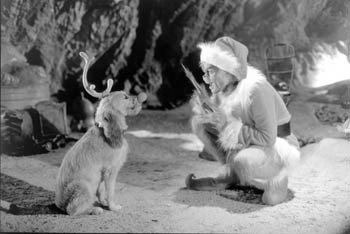 ‘Grandma’ singer dazzled by ‘The Grinch’

Writer David Templeton takes interesting people to interesting movies in his ongoing quest for the ultimate post-film conversation. This is not a film review; rather, it’s a freewheeling, tangential discussion life, ideas, and popular culture.

“WELL,” remarks a dazzled Dr. Elmo Shropshire, as Dr. Seuss’ How the Grinch Stole Christmas, starring Jim Carrey as the Christmas-hating Grinch, comes crashing and hyperventilating to a close. “All I can say is, we sure didn’t have things like that when I was growing up.”

Sure we did. Only we called ’em roller coasters. Or freak shows. But I know what my appreciative guest is talking about. This new Grinch is full-tilt, state-of-the-art eye candy. Colorful and visually rich, it’s a wild and woolly wonder of art direction. Though occasionally reaching a bit too low for its laughs, the extravaganza is so relentlessly energetic that it nearly leaps off the screen and into the laps of its startled audience.

As the credits roll, Elmo remains glued to his seat, gazing reverently up at the screen. As the names of the film’s many makeup artists begin to scroll by–and there is a small army of them–my guest remarks, “I knew there’d be a lot of makeup people. The makeup was amazing. Every character in the film was done up. It must have taken those people hours every day.”

At least. In addition to the famous green-fur-and-wrinkles look worn by Carrey in the film, the entire population of Whoville sports scrunchy little pig-noses and big, protruding front teeth. Hmmm.

But aren’t those piggy people a distinct departure from the cherubic little Whos drawn by Dr. Seuss in the classic children’s book on which this film is based?

“I liked it,” says Elmo. “It really added to the whole ambiance to see all those people with those weird, strange faces, dancing around the Christmas tree.”

Of course, Dr. Elmo has a well-documented fondness for weird things at the holidays. A bestselling folksinger who until recently worked full-time as a veterinarian, the good doctor, who makes his home in Novato, is best known as the man who brought us “Grandma Got Run Over by a Reindeer.”

A song so sick it actually elicited public protest marches when it first came out 21 years ago–the Grey Panthers thought it was ageist–the satirical tune about an unfortunate Christmas Eve hit-and-run has sold over 5 million copies and become the most requested Christmas song of all time.

Since recording the song–which was written by Dallas tunesmith Randy Brooks–Elmo has become inextricably linked to Christmas, much the way Elvira is now cemented onto Halloween.

Last year he gave 180 radio interviews between Thanksgiving and Christmas. That’s in addition to a brutal touring schedule that kept him hopping throughout the holidays. This year the schedule will be even tougher as Elmo promotes a new CD, Up Your Chimney (Laughing Stock), which features a new song by Brooks–the slightly racy “Goin’ on a Date with Santa” and includes such Yuletide oddities as “Uncle Johnny’s Glass Eye” and “Texas Chainsaw Christmas.”

There’s also a brand-new animated video version of “Grandma Got Run Over by a Reindeer” and a hot-selling reindeer toy that shimmies and sings the Grandma song.

Though Grandma is, as Elmo puts it, “the one that pays the rent,” he has had a few other hits. “Grandma’s Killer Fruitcake” was a modest success in 1994–yes, there will be a singing fruitcake toy, due out next year–and “Kenneth Starr Is Coming to Town” (co-authored with Mill Valley’s Rita Abrams) won him further acclaim around this time last year.

“I’ve never been so busy in my life,” says Elmo, perched on a stool in the downstairs studio of his bucolic house in the Marin hills. “Of course, everyone is busier now. Christmas is so stressful for people, it’s no wonder our Christmas movies and songs have become so much more intense. That’s one of the messages of the movie: that Christmas is supposed to be about something other than running around shopping for presents.”

As he talks, a handful of deer (not reindeer; just the usual Bambi type) are meandering on the grass just outside the window, sanding an arm’s length away are Elmo’s numerous guitars. Just over his shoulder, hanging on the wall, is his gold record for Grandma. A stack of CDs rests on his desk.

“You know, The Grinch did have that ‘noncommercial’ message,” Elmos points out, “which is kinda ironic, because they obviously spent multi-millions on that production, clearly in hopes that they’ll make multimillions, all by delivering a message about the importance of not commercializing Christmas.”

On the other hand:

“I think everybody likes to dream of a noncommercial Christmas,” he muses, “but for those people who make a lot of their money at Christmas, and that includes myself, obviously, we kinda depend on the overly commercial parts of Christmas. It’s a funny position to be in.”

The phone rings. It’s a DJ from Tampa, Fla., leaving a message asking for a CD and an interview with Elmo. Strangely, though, I can swear the song he mentions is “Grandma Got Recounted by a Reindeer.”

“Yeah, that’s right,” Elmo. “We wrote and recorded it yesterday, as a parody of the elections in Florida. It’s not the best thing I’ve ever done, but it is timely, and people tend to forgive you if it’s timely.”

One has to wonder, with so much going on every December, does Dr. Elmo ever get a chance to relax and enjoy the holidays, have a cup of eggnog, kick back with his family?

“It’s a good question,” he replies, with a laugh. “To tell you the truth, after last year, when I put in 20-hour days for five weeks straight, I’m almost afraid of Christmas now. I only hope my strength holds up.”

There’s no chance of Dr. Elmo turning into a Grinch, though.