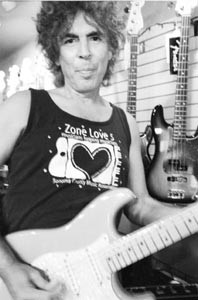 SOME ACTS you just never forget. Stu Blank of Santa Rosa has always been a musician’s musician. Back in the ’70s and early ’80s when his band, the Nasty Habits, was a major attraction on the Bay Area club scene, Blank gained a reputation for being a consummate keyboard player with a penchant for outrageous displays of showmanship.

On closing night in 1996 at the Rio Theater in Rio Nido, Blank lit his piano on fire, pushed it out into the audience, jumped on top of it, and did a harmonica solo while it burned.

Earlier this year, Blank was making a strong comeback both musically and personally. He’d done some sessions with Boz Scaggs and had reunited with his wife and five children. But then tragedy struck. In early September, he was diagnosed with skin cancer that quickly metastasized throughout his body.

Although Blank does have medical insurance, Frank Hayhurst and Musicians Helping Musicians–a nonprofit organization founded by Hayhurst that assists ailing musicians and their families with medical costs and living expenses–have scheduled a major benefit in Cotati to help Stu and his family.

“Insurance covers the basic treatments when someone is very ill,” says Hayhurst, owner of Zone Music in Cotati. “But the medical establishment quickly runs out of options. If you want to seek any type of alternative medicine that won’t be covered by insurance.

“First and foremost we want to take care of Stu, but we also want to help the Blank family,” he continues. “We want to pay down their mortgage and other debts and see if we can provide some future security for his wife and children.”

Hayhurst, who this year was a recipient of the Bohemian‘s Indy Award for his work with MHM, founded the organization in 1994. To date, MHM’s musical benefits and donations have raised over $300,000 for various causes.

Hayhurst has set a goal of $40,000 for the Blank benefit, which he hopes to raise through the musical event itself and a silent auction to be held at the Inn of the Beginning on the night of the show.

A preview of auction items will be displayed at the Powerhouse Brewing Co. in Sebastopol on the Sunday afternoon before the benefit.

Among the performers scheduled to perform at the Cotati event are Norton Buffalo, Nick Gravenites, the Pulsators, Mark Naftalin, Michael Bolivar, Chris Hayes, Steve Kimock, the 40-member Stu Blank Inspirational Singers, Love Choir, Sarah Baker, and the Kay Irvine Band. Each group will play a short set in what should prove to be a memorable musical marathon.

“This will be one of the biggest gatherings of performing musicians in the history of the North Bay area,” Hayhurst promises. “Hopefully we can use our local MHM efforts as a template to show the National Association of Music Merchants how to do this sort of thing on a national level.

“Our program is a way people can raise money and be sure it’s going directly to the people who need it,” he continues. “It truly is musicians helping musicians.”

Hayhurst has high hopes for the Cotati event. “Beyond the incredible outpouring of love from the bands themselves, people have donated all kinds of things for the auction, including massages, artwork, posters, and jewelry,” Hayhurst says.

“Zone Music also has donated a Fender Squire Stratocaster guitar that will be autographed by all the musicians playing in the event.”

More than 30 bands and over 300 musicians have agreed to appear at different venues in downtown Cotati. Hayhurst feels everyone is sure to be comfortable at one of the locations.

“The bands will play at four separate spots,” says Hayhurst. “The Tradewinds and Spanky’s are bars. The Inn of the Beginning is a nightclub, and the Redwood Cafe is a restaurant. Even if you don’t drink or you’re underage, you can still listen to some great music.

“Each venue will have its fair share of top acts.”

In the past, Stu Blank was always quick to take part in MHM benefits. He appeared at the first-ever MHM event (to aid two musicians’ wives with breast cancer) with a group of local players who billed themselves as Stu Blank and Friends. Blank is also one of the founders of the Sonoma County Music Association, which puts on showcase concerts for young musicians in addition to offering professional legal advice.

“Stu has been at the front of the line whenever the call went out for North Bay musicians to play,” says Hayhurst. “He’s also a guy we all recognize as a musical genius. I’ve seen Stu do some amazing things. He can sit at a piano by himself in a bar and make up songs. I mean, these are great tunes with strong hooks that could be potential hits.

“The man is a boogie-woogie Mozart.”

Blank is currently undergoing intensive chemotherapy in an effort to turn his cancer around–though he did play the San Francisco benefit concert–and was unable to speak to the Bohemian. He did e-mail a thank-you to everyone involved in the benefit, however, and asked people to “please send light and prayers.”