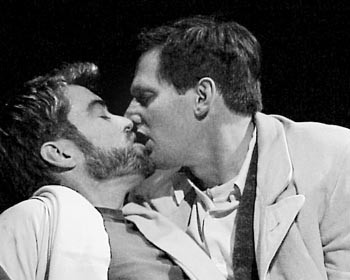 Both have their purposes, both share a noun, but only one will save your soul.

Perestroika, a pre-millennial tangle of subplots mired in the AIDS epidemic and GOP-centric politics of the late 1980s, is a kinder, gentler version of its predecessor, supported by a raft of unforgettable performances expertly shepherded by director Argo Thompson.

Owing to a few Miltonic visitations from, as one character puts it, “a mixed-up reactionary angel” (silky-voiced Bronwen Shears), AIDS-infected Prior Wallace (Peter Downey) has dubbed himself a prophet. His ex-lover, Louis (Steven Abbot), navigates an ill-begotten relationship with a married Mormon law clerk. Both endure heartbreak on the ever-forking road to redemption.

Those reprising their roles from last year’s stunning AT production of Angels in America, Part One: Millennium Approaches (restaged this year in rotating repertory with Part Two) include an electric Danielle Cain as the Valium-addicted Mormon housewife Harper, Armond Dorsey as gayer-than-thou nurse Belize, Joe Winkler as the despotic real-life attorney Roy Cohn, and Shears as the Angel.

Interestingly, Downey returns this season as Prior, leaving his original role of Prior’s lover Louis happily available to Abbot (which makes Downey one of the few actors to have ever played his own lover).

Drifting across the stage like a spectral vision swaddled in a black scarf, coat, and Jackie O. sunglasses, Downey’ s Prior is a revelation–every line is an honest discovery, his earnestness is heart-wrenching, his ability to convey courage in the face of tragedy is riveting. Downey’s characterization is absolutely realized–from Prior’s off-the-cuff wit to his sudden bent toward prophecy.

As Prior’s wayfaring lover Louis, Abbot, too ,turns in a topnotch performance. Watch for his seduction of Cohn’s lackey, Joe Pitt (aptly played by John Shillington): it’s a disarming study of attraction imbued with a delicious olfactory conceit. Abbot’s delivery of Kushner’s text is exquisite, including such ear-boxing lines as “If you have to talk, talk dirty.”

Winkler’s Cohn is theatrical genius. The actor effortlessly dispatches the onerous task of making the loathed Cohn an endearing portrait of an ego gone awry (Winkler could play Hitler at a children’s party and shame Mr. Rogers). Winkler’s conception of Cohn is impenetrable–not one crack reveals the actor’s artifice behind the character.

As his nurse and conversational foil Belize, Dorsey turns in a well-hewn comic performance as when, to account for his erratic behavior, he quips, “I’m trapped in a world of white people–that’s my problem.”

AT’s Perestroika is truly a gift to its audiences. One needn’t see both Angels to enjoy either play, but it’s highly recommended in order to understand the scope of both Kushner and AT’s awesome talents.