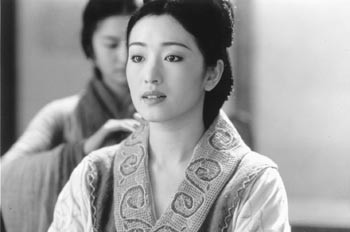 ‘The Emperor and the Assassin’

The Emperor and the Assassin.

DIRECTOR Chen Kaige’s overstuffed opus The Emperor and the Assassin proposes that a Freudian trauma drove the king of Qin, Ying Zheng (Li Xuejian), to unite the six warring kingdoms of ancient China into one empire. This version of the story suggests that the future emperor is at heart an innocent. He doesn’t reckon what an enormous goblet of blood he’ll have to drain to unify the nation.

Set 2,200 years ago, the film takes place centuries before the institutionalized hauteur one associates with the Chinese court. Thus Li Xuejian plays the emperor-to-be as a swaggerer, rudely chomping down on his food. He’s a bowler, too.

Ying Zheng figures that if one of the nations he plans to absorb were to send an assassin after him, it would be a pretext for a declaration of war. His lifelong lover, the Lady Zhao (Gong Li), offers to go to this nation as his agent provocateur.

She’s so dedicated to his cause that she has her face branded, to mark her as a traitor and to make the story of her betrayal plausible. Gong, one of the prettiest faces in the movies, wears her traitor’s scar like a beauty mark. It’s a becoming, quarter-sized little blemish that looks like a daisy with a few petals missing.

When she arrives at the hostile country, she recruits a hired killer, Jing Ke (Zhang Fengyi), who lost his nerve after a job went wrong. Delay ensues. Soon, Ying Zheng’s atrocities turn the Lady Zhao against him–and toward the killer she’s hired.

The Emperor and the Assassin is a huge epic, and this may be enough for the spectacle-hounds. Chen packs the film with overpowering scenes of the courtyards of the city of Yan, thundering with taiko drums; the opening chariot battle; and the massacre within the gates of the Qin palace.

Woody Allen was already shrewd enough to acquire the talents of Zhao Fei, who gave Sweet and Lowdown its fresh, humid look. The outstanding cinematographer manages to make the dust and wastelands of north China look creamy and radiant.

As for Chen, it would take a greater master than he is to keep this sprawling tale under control. The Emperor and the Assassin contains five episodes in three hours, and you feel that length, especially during the soap-operatic third episode, when the king confronts the truth of his parentage.

The episode seems like filler compared to the final part. Here we see the confrontation between a hired killer, who knows how exhausted he is by bloodshed, and the emperor-to-be, who doesn’t understand he’s poisoned everyone around him.

Their confrontation is the marrow of the story, and Chen cuts tellingly between the assassin’s frightful clowning on the point of the attack and the hurt in the ruler’s eyes as he faces his would-be murderer. Here, the director points out his thesis: an emperor and an assassin have a lot in common.