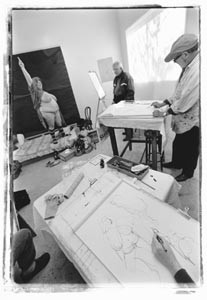 GINGER DUNPHY is trying not to smile. Semi-reclining on a bench under a low-hanging, moss-encrusted tree, Dunphy is leaning back on one arm as she holds the other tight against her side.

As she gazes serenely into space, her lined face is a study in serenity. Her 52-year-old body, short in stature and bountiful in size, might be in a state of profound meditation. For what seems like ages–but is only a few minutes–Dunphy doesn’t move a muscle.

Suddenly, a pencil-wielding artist–and she’s literally surrounded by them at the moment–cracks a joke: “All that grass sticking up around you doesn’t look quite right,” he says. “So I’m turning the grass into flames.”

In response, Dunphy’s face breaks out of its trancelike state as she erupts in a musical burst of laughter.

“As in the flames of hell? Oh, thanks!” Dunphy affectionately snaps back at the playful offender. “Well, why not? My mother figures that’s where I’m going anyway.”

Then Dunphy–who was once a Catholic nun–swiftly returns to her former pose and holds it for another 22 minutes. As she works, a grand total of eight artists skillfully turn Dunphy’s form and face into eight different works of art.

Eventually, Dunphy will move back inside the warm barnyard studio where Santa Rosa artist Donna DeLaBriandais has for 10 years hosted a weekly get-together of local artists interested in drawing and painting the human figure. It’s a three-hour session, during which various models, one each week, pose several times, indoors and out, clothed and otherwise.

Dunphy’s easy rapport, quick-witted sense of humor, and nonexistent modesty in regard to her body have made her a favorite at DeLaBriandais drawing group, where she poses about once a month.

KNOWN SIMPLY as Ginger to scores of artists from New York to Oregon, Dunphy was let loose from a semi-cloistered convent in Southern California in the mid-1960s.

She has been an artist’s model for over 25 years, ever since the day local artist Drew Upton asked her to model nude for a life drawing class at Sonoma State University.

“I took to it instantly,” Dunphy says. “I’m very at ease with nakedness. Being nude in front of people feels no different to me than wearing clothes in front of people. And it turned out that I was good at being a model.”

Before long, Dunphy was working up and down the state, modeling for student artists and established professionals alike.

“At first I thought I’d been asked to model because I was fat,” Dunphy admits. “Because there are very few fat models around, people willing to take off their clothes in front of a roomful of artists, and from an artist’s point of view, fat is interesting.

“But let’s face it,” she continues. “It’s hard enough to be fat in this world with your clothes on.”

In other words, Dunphy filled a niche. But that’s not all.

“I realized that my popularity with artists wasn’t all about my size,” she says. “I think I understand what artists need, and I’m very willing to give that.'”

In short, Dunphy’s talent lies in her knowledge of how to be interesting.

“Ginger is amazing,” praises DeLaBriandais. “She’s very generous, very intelligent. And she’s lots of fun to be around, naked or not. This is not easy work for any model, but Ginger makes it look easy.”

As a celebration of the vital role such models play in the lives of artists, DeLaBriandais, in association with the Cultural Arts Council of Sonoma County, has coordinated a new show: “The Spirit of Ginger–Artists and the Model.”

Opening March 17 at the SoFo2 Gallery in Santa Rosa, the show will feature the works of 14 artists from around the Bay Area. The subject of each work: Ginger.

“We’re letting Ginger stand in as the icon of all models,” says DeLaBriandais, “And we’re using the show to honor every model’s unsung contribution to the art world.”

ON THE WALL INSIDE the barn hangs a small poster with the words “When you surround yourself with loving and supportive people, your creative energy will flourish.”

At the moment, there is creative energy to spare, as the amazingly spry Dunphy–who stays in shape by swimming, stretching, and dancing–now poses afresh on the studio’s tiny stage, illuminated by a row of overhead track lights.

At the foot of the stage are bags full of Dunphy’s many props: hats, feather boas, and costumes, including a nun’s habit and a red riding hood. Earlier in the session, she performed the famous fairy tale, wearing the hood and cape and nothing else.

The space is cozy but comfortable. The day’s assembly of artists–all of whom will have works on display in the “Spirit of Ginger” show–are crouched or standing in every corner of the room. Meanwhile, Dunphy sits half-straddling a chair, wearing a tight-fitting red and white striped dress, her legs apart, one arm coyly draped over the chair’s back.

“No, no, no,” Dunphy responds, without moving. “Sharon Stone did that for a roomful of policemen. That’s not my crowd. I much prefer artists.”

After the session, Dunphy makes a quick trip through the studio to see what her clients have come up with. Oohing and ahhing, she beams and guffaws at a series of sketches drawn from her “Red Riding Hood” bit.

“This is one of the things I love about this job,” she says. “There’s immediate gratification. Like an opera singer who finishes an aria and is rewarded with applause, I do my work and then, voila! There’s a piece of art. And it’s all me! I love that.”

‘Rebels with a Cause’