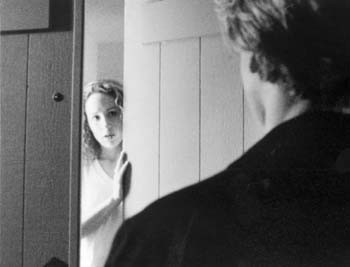 The other woman: Jennifer Pruitt and Dean Bukowski star in The Distraction.

‘The Distraction’ offers a tepid tale of sexual misbehavior

OK. There’s this young married couple, and everything seems to be going fine with their marriage. Then the husband learns that, once upon a time, baby did a bad, bad thing. Suddenly the husband can’t stop imagining his wife flopping around naked with some other guy. Unable to deal with it, he begins a long journey into a weird world of temptation, obsession, and seduction. Ultimately, he comes home and cries.

It’s not. The Distraction, by South Bay filmmaker Greg Tennant, is a low-budget 16mm drama starring a cast of unknowns, filmed in 29 days last year. The story of newlyweds Paul and Ally (played by Dean Bukowski and Elora Hayes), the film follows Paul through his workplace infatuation with an unstable woman named Leslie (Jennifer Pruitt), an infatuation that grows into love and obsession, threatening his marriage and his sanity. It’s a small film, a well-intentioned effort made by people who care about the way real people interact with each other.

If I sound a bit like a bully, I confess that I feel like one. Small independent films should be cut some slack, if for no other reason than that they grant us a view of the world that mainstream Hollywood seldom allows us to see. They let us to take in new ideas–and there are a few good ideas in The Distraction, which places it ahead of many mainstream Hollywood films.

But even small films have a responsibility to do more than give us one or two things to think about; they still need to make sense, and they should be at least moderately entertaining.

What ideas Tennant does have are obliterated by his cast’s strained and unsure performances. The bizarre script tries so hard to reflect realistic speech patterns and behaviors that it frequently comes off as simply absurd.

We know Paul and Ally are newlyweds because they do silly things like roll around playfully feigning cannibalism: “No eating people,” Ally scolds as Paul tries to consume her forehead. “But that’s the only way you’ll be any closer to me,” he murmurs.

Later, unable to handle Ally’s long-ago affair with his best friend, Paul makes friends with Leslie: “She makes me feel nice,” Paul explains to his wife. “The fact that someone makes you feel nice is nice.”

Yes, it is, Paul, and yes, real people are seldom very eloquent. The problem with basing a script on such stuff is that realistically stupid dialogue eventually begins to be just plain stupid. Just ask Stanley Kubrick.