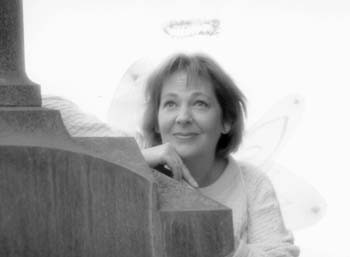 HOME TO SO MANY visionaries, idealists, and New Age alternatives, Sonoma County would seem to be an appropriate setting for life’s last innovation: ecoburial, a controversial plan that calls for the use of biodegradable caskets and an end to the practice of embalming. But it’s not a transformation that the funeral industry is likely to embrace. This radical approach to the disposition of our beloveds’ remains has been initiated by none other than Karen Leonard, Sonoma County’s tireless advocate for the grieved, and no friend to the mortician.

Leonard has been calling funeral home directors on their abuses since 1992 when she founded the Redwood Funeral Society to protect the public from exploitation by an industry whose high prices and misrepresentations are endemic despite the late Jessica Mitford’s brilliant 1963 exposé of its excesses, The American Way of Death, recently revised and republished in 1998 as The American Way of Death Revisited (with Leonard’s assistance).

And, indeed, it is in her name that the new Jessica Mitford Memorial Project has been conceived.

Now dominated by three international corporations, the mortuary industry controls every aspect of death care from transportation to cemetery lawn maintenance. And costs keep rising. Although the society had found one independent funeral director whose services were reasonable, Leonard encouraged people to avoid morticians altogether by caring for their own dead, a movement which Jeri Lyons’ Natural Deathcare Project has done much to foster here. Families saved money in the process, but even then, they had to use standard facilities for cremation or burial.

“Then we started seeing a ‘non-funeral director handling fee’ showing up on the price lists,” Says the indomitable Leonard.

“We didn’t know how to protect consumers in the future unless we entered the market ourselves,” she says, and so they have undertaken to “create that which is not“–simple services in a park setting, with low fees.

ASTANDARD AMERICAN funeral with the sleek brass-handled coffin can cost $10,000 or more, and the environmental costs are also high. Packed graveyards with stone markers and vaults clutter the landscape. Embalming, contrary to what we have been told, does not preserve the body so much as extend its decomposition; the process releases the blood-borne pathogens into the sewer systems, while the disintegrating remains eventually drip down through the soil toward the water table. Even cremation, which saves space, releases pollutants into the air, especially when the body has been embalmed and placed in a casket, as morticians are prone to insist.

The alternative is simple, as Leonard and friends explained at an Aug. 22 gathering in the San Francisco home that Mitford shared with her husband, Bob Treuhaft. To bring it to fruition, the society has teamed up with Jeri Lyons and a new company, Memorial EcoSystems. The project will offer reasonably priced burial and cremation services in a lovely setting–a private nature preserve–without embalming, using simple, biodegradable caskets and small markers identified with the use of a global positioning system, to create a “living legacy” that preserves and restores the surrounding landscape for generations to come.

In the process, they hope to transform our attitudes about death, for “death is a part of life,” says Funeral Society board president Ann Tompkins. The memorial park will be a place people visit to attend theatrical performances and concerts in the Memorial Theater, or even a wedding, and enjoy a stroll along park trails, for 90 percent of the land will not be used for burials.

According to Leonard, “Those fortunate to choose to be buried there will be leaving a living legacy to their inheritors. Only the relatives of these people will be able to hike the trails, wade the streams, climb the rocks, and picnic on land that will be forever preserved in its natural state.”

LIKE SO MANY good ideas–organic farming, home birthing, herbal medicine–this new approach is as ancient as it is revolutionary. As Dr. Billy Campbell, owner of the Memorial Ecosystems, reminds us, the biblical “dust to dust” did not include embalming. His South Carolina-based company already has one memorial park back home, the Ramsey Creek Preserve. Campbell, a family doctor, started thinking about death care back in medical school, where he often found himself “hanging out with cadavers for eight hours at a time.”

Dedicated to land preservation, he realized that “if we spent half the money we spend right now in this wasteful industry, we could save a lot of land.” And if people were linked to that land by the bones of their ancestors, “it would become a sacred space,” as burial grounds have always been for native peoples.

Memorial Ecosystems, a for-profit company, will not be the owner of the preserve. To ensure its protection, the company hopes to team up with the Nature Conservancy, which has expressed interest in this endeavor as a way to support land stewardship. They are looking at 420 acres in Franz Valley (between Calistoga and Santa Rosa), but negotiations have not yet begun. Says Leonard excitedly, “We could be up and running within a year.”

All agree that Jessica Mitford would have loved it.