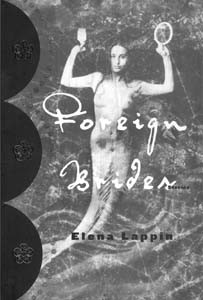 AS FANTASIES GO, the idea of shacking up with an exotic foreigner ranks high in the imaginations of many people. There’s always something alluring about a different culture, and the idea that love is strong enough to cross international borders is a powerfully romantic one. Just ask Cleopatra, or Ivana Trump.

In her debut collection of short stories, Foreign Brides (Farrar, Straus & Giroux; $22), author Elena Lappin takes the fantasy and runs with it. The 12 stories feature women who have made marriages across cultures, often leaving their native countries in the process. Some are seduced by a lover’s difference from them; others are merely attempting to escape drab lives. And–perhaps inevitably–none of them gets quite what she envisaged.

One of the problems, for Lappin, is the hidden cost of exile: “All émigrés have the same basic story to tell,” says a character in one story. “There is that small death when they leave their home country . . . that short-lived euphoria when it looks like they’ve been blessed with a chance to rewrite their script in a free society, and then comes the life-long sadness once they realize that they have made an irreversible choice to cut themselves off from their roots.”

For most of Lappin’s women, the transition to “life-long sadness” comes all too quickly, as a promising-seeming marriage burns out or a loved one’s death alters an already unfamiliar landscape. But these women are fighters. Instead of giving up, they wrestle with their disillusionment and adopt creative ways of coping.

In the sparkling first story, “Noa and Noah,” Israeli Noa is two years into her marriage to British Noah before her English improves enough to realize that he’s not a glamorous businessman–rather, he’s a debt collector whose “sexy” mutterings in bed are actually bits of soccer trivia. Noa regroups, then gets her revenge by serving orthodox Noah meat that’s treyf (non-kosher) and by getting herself a piece of the hunky butcher.

Likewise, Russian mail-order bride Vera finds herself in hot water when she goes to London to meet English Charles in “Peacocks.” Having been seduced by his posh Kensington Gate address (“the first word reminded her of Diana’s funeral”), Vera is devastated to learn that Charles is only the butler at the mansion where he lives. She stays with him anyway, and when Charles gets fired, it’s Vera who turns the tables and takes charge of the couple’s future.

Lappin, who was born in Moscow and has lived in places as far afield as Israel, England, Germany, and Canada, is alive to the humorous aspects of cross-cultural unions. She’s also particularly good at analyzing the power imbalances that determine how a relationship is run–and by whom.

THAT ANALYSIS APPEARS in “Peacocks,” when Charles meets Vera at the airport. He sees her as “a kinky dream come true,” whereas Vera notes only that Charles is “shorter than she had imagined, and rounder too.”

In “Framed,” a German woman reluctantly accepts her Hebrew teacher’s obsessive love, and we’re told that her feelings for him are those of “a tender friendship,” while his love for her is “a life’s passion let loose, like a tulip breaking into height and colour after a long winter in frozen ground.”

You don’t have to be Dr. Ruth to predict the trajectories of these relationships.

Although she is a skillful humorist, Lappin doesn’t always go for easy laughs. A darker tone inflects several of the stories. In “Michael Farmer’s Baby,” the distressed feelings of an abandoned woman surface as a phantom pregnancy. None of Lappin’s characters stay gloom-ridden long, though; most of the stories end on an appealingly upbeat note. Nor are the stories repetitive, even though they all riff on the same basic theme. Lappin has come up with that rare thing: a concept-driven collection that also works on a story-by-story level.

But not every story is a gem–both “Bad Writing” and the very short “Unguarded” feel thin, and many stories end with a too-neat twist–but Lappin’s snappy prose is a pleasure to read, and her lively heroines are memorable.

They may lose out in big ways, but these globetrotting women prove that there is life after disappointment.