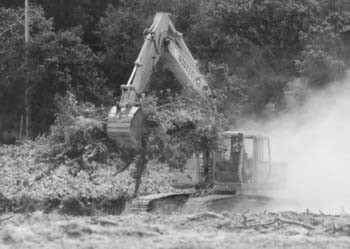 Bitter harvest: A steam shovel destroys vintage apple orchards at the Dutton Ranch to make way for vintage wine grapes, a trend that apple growers say is endangering a way of life.

TAKE A DRIVE down Graton Road in Sebastopol, open the car windows, and take a nice deep whiff. The sweet fragrant smell lingering in the balmy evening air is unmistakable: apples. The trees, leafy and full, are laden with pale green and rosy-skinned fruit. It’s a scene that, for decades, has defined the west county, with its signature apple products, apple blossom fairs, and apple harvest celebrations.

But focus on the scenery in between the orchards, and apples start to look like an endangered species.

Rows and rows of wine grapes, stately green and elegant, seem to be marching right over the apple trees. Why? Wine grapes take less water and bring in more than 10 times the money per ton. And, say local apple growers who gathered at a recent meeting, the future of their time-honored tradition is looking even bleaker.

The local apple industry was thrown a curve in addition to changing economics this summer with apple processor Vacu-dry’s abrupt decision to close after more than 25 years as a mainstay of the Sonoma County industry. While there are market opportunities for varieties such as Gravenstein, Red Delicious, and Macintosh, almost all of the county’s Rome apples–totaling about 13,000 tons last year–were processed at the Sebastopol plant. Another 6,000 tons of apples of different varieties were bought and processed by Vacu-dry as well.

The apple harvest is in full swing now, and many local growers still have no home for the apples they expected to sell to Vacu-dry.

“I think there will be some apples rotting this year,” says 77-year-old Bill Braga, who farms 125 acres of apples in Sebastopol. “What Vacu-dry did to us, it wasn’t quitting that was so bad. We could have dealt with that. But to do it so late in the season. They caught us at the time that we were about to harvest.”

Vacu-dry was the main outlet for grower Warren Dutton’s 50 acres of Rome apples. “We have a big crop this year. We need to sell somebody a lot of fruit,” says Dutton, whose orchards produce about 30 tons of apples per acre. “It’s definitely possible that we’ll have trouble selling Romes.”

Dutton is one of many local growers feeling the pinch, and several thousand tons of apples could end up with no buyer this year. “They’ll just rot away on the ground,” Dutton says. “In California there really is no processor that can absorb as much as Vacu-dry was taking.”

At a recent meeting at Dutton’s Sebastopol ranch, worried growers crowded around folding tables set up in the tractor shed. Industry buyers and advisers joined in the discussion of finding an outlet for this year’s crop, as well as the future of apples in Sonoma County.

The prevailing mood is not optimistic.

Jeff Haus, owner of the new Sebastopol cider pub, Ace in the Hole, tells the group that he could use more organic Gravensteins. But his business–the first hard-cider pub in the United States–has just opened, and, while he hopes to become a major buyer of apples, he won’t make a dent in this year’s harvest.

Mark Fitzgerald of the Barlow Co., which makes apple juice and sauce, says they are going to use twice as many apples as last year. But at 1,500 tons, it isn’t enough to take care of this year’s Vacu-dry orphans.

“Good luck to everybody,” Fitzgerald tells the crowd. “Every time I think about this, my heart bleeds. You really got screwed.”

Most of Sonoma County’s 40,000 tons of apples are sold for juice, with less than 10 percent ending up in the produce section of the supermarket.

“People tend to buy apples by how they look, and our apples don’t look as good,” says Sonoma County horticulture adviser Paul Vossen.

IN THE PAST several years, cheap apple concentrate from China has severely undercut the county’s juice market. Washington state apple processor Tree Top, which bought out competitor Vacu-dry, offers about $20 a ton for juice, which isn’t enough to cover costs for Sonoma County growers.

There is a savior of sorts for local apple farmers, says Vossen–wine grapes.

“Anyplace that has potential for wine grapes . . . it’s crazy not to think about it,” he says. “There are a few very select places with 55- to 60-degree temperatures at night, nice warm sunny days. The same thing that gives wonderful taste in berries and apples, that’s in grapes.

“There’s only one commodity that pays a premium based on that taste,” Vossen continues.

Wine grapes, according to the county’s 1998 Agriculture Crop Report, fetched about $1,740 a ton, up from $1,589 in 1997. Apples, by comparison, sold for $156 a ton, down from $179 the year before. Even though apple orchards produce more than twice the tonnage of fruit than vineyards, wine grapes clearly net the big bucks.

“I have orchards I never want to take out. They are beautiful orchards,” Dutton says. “But the very best wines are being made from grapes from Sonoma County. I sell to 37 different wineries.

“If you can’t sell the fruit and make money, you have to take the orchards out,” he adds. “Grapes are one of the things you should think about.”

At a cost of about $20,000 an acre to plant grapes, replacing apple orchards with vineyards doesn’t come cheap.

And for some growers, apples are a way of life that goes beyond economics.

“This apple business is like a yo-yo,” says grower Braga, tanned and feisty, the picture of a hard-working farmer in worn pants and baseball-style cap. “You’ll have good years and bad. The secret is to survive.

“Let’s get buyers in here,” he tells the crowd of growers. “If we can’t do that, I say pull ’em out and plant grapes. It’s a tough deal, we’re up against the wall.”

But Braga himself is not one to take his own advice–which just may provide a glimmer of hope for apples in Sonoma County.

“I’ve been in the apple business all my life. It’s in my blood,” he says. “Those of us that can survive, we’ll never get rich, but we’ll be glad.

“I enjoy watching the trees bloom, pruning them, taking care of them,” he adds.

“I’ve never had knowledge of grape growing, and I’m not going to start now.”